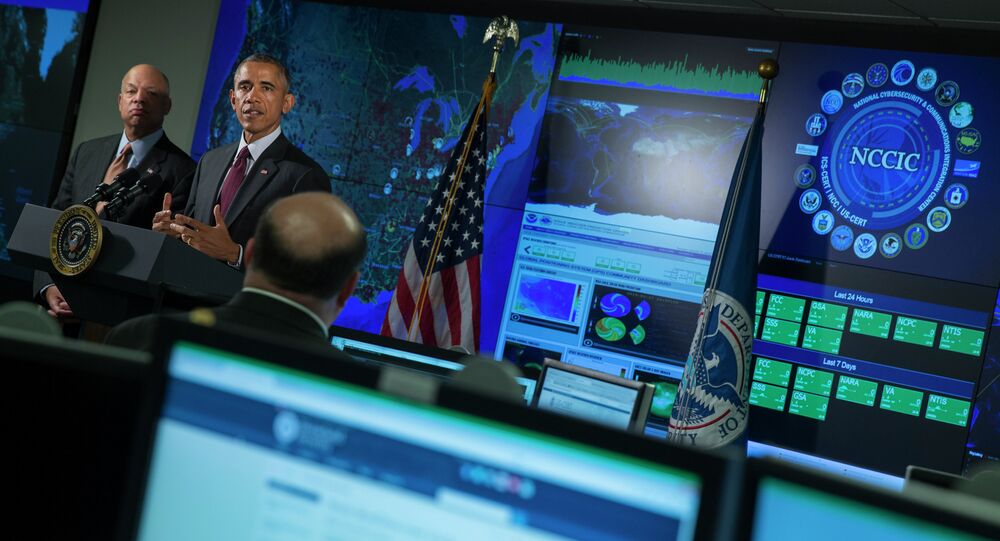 © Fotolia / Feng Yu
US Senator Says US Must Act to Inform, Protect Americans Following Massive Data Breach
MOSCOW, (Sputnik) — US President Barack Obama will unveil a consolidated 50-member $35-million agency dedicated to cybersecurity, in light of the growing number of cyberattacks in the past year, The Washington Post reported Tuesday.

According to the newspaper, US homeland security adviser Lisa Monaco is set to open the Cyber Threat Intelligence Integration Center later on Tuesday at the Wilson Center think tank in Washington.

"It will help ensure that we have the same integrated, all-tools approach to the cyberthreat that we have developed to combat terrorism," Monaco was quoted as saying in an interview ahead of her keynote speech.

© Flickr / powtac
UN Official Calls on States, NGOs to Share Data on Encryption Technologies
The new center is expected to draw intelligence from a number of existing agencies, using the National Counterterrorism Center (NCTC) as a blueprint. The NCTC itself was established after intelligence communities in the United States were criticized for failing to share information, which led to the September 11, 2011 terrorist attacks.

Critics, however, claim many other organizations, like the Department of Homeland Security, FBI and NSA, have the cybersecurity capabilities and are already integrating intelligence in this field.

"We should not be creating more organizations and bureaucracy. We need to be forcing the existing organizations to become effective — hold them accountable," former director of the Joint Interagency Cyber Task Force and private sector expert Melissa Hathaway was quoted as saying by the newspaper.

© REUTERS / Larry Downing
Obama Aims to Broaden Gov't Control Over Private Data Amid Cyber Attacks
Obama's $4-trillion 2016 budget proposal outlined last week earmarked $14 billion for cybersecurity in the United States, as a growing number of US institutions have been hit with cyberattacks throughout last year.

In January, the US president announced a public-private sector data-sharing legislative proposal to combat the evolving threats of cyberattacks and identity theft.

In the latest cyberattack last week, the personal data of as many as 80 million customers and employees of insurance provider Anthem Blue Cross Blue Shield are feared to have been stolen.

A number of US institutions, such as financial giant JP Morgan, the US State Department and Sony Entertainment have fallen victim to hackers over the course of 2014.