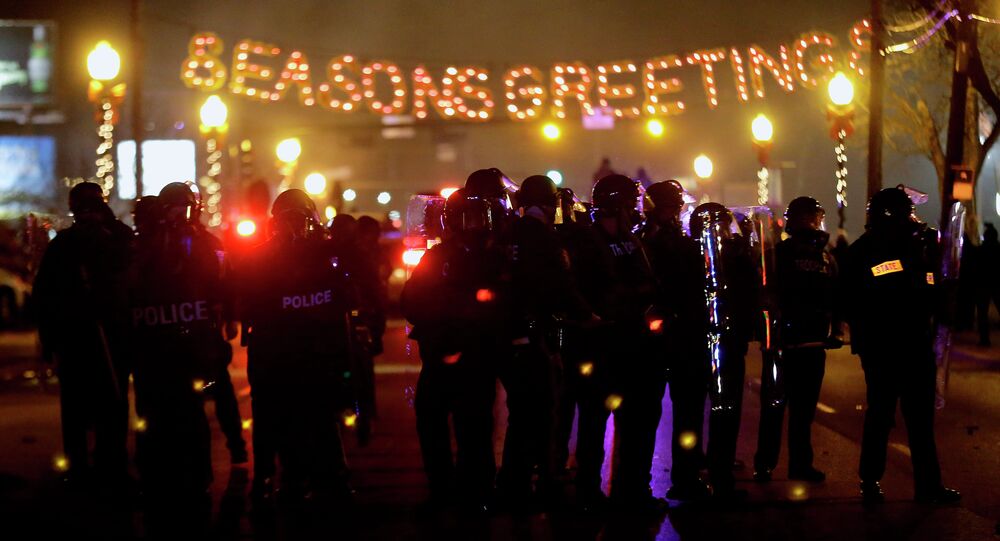 To mark six months since the death of unarmed teenager Michael Brown at the hands of police in Ferguson, Mo., protesters gathered in New York City to remember the victims of police violence and call for an end to police brutality.

A vigil at Foley Square was followed by a march past the federal courthouse and on to Grand Central Station, where protesters bore signs with portraits of Brown and the movement’s slogan “Black Lives Matter.”

In Missouri, a small group of protesters also started off the day by carrying a coffin to the house of St. Louis Mayor Francis Slay. They planted signs in his yard with the names of other victims of police violence, and called the event a “Monday Mourning Wake Up Call.”

Eighteen-year-old Michael Brown was shot and killed on Aug. 9 after a confrontation with then-Ferguson police officer Darren Wilson, who had stopped him for jaywalking. A grand jury declined to indict Wilson on any charges in November and he later resigned from the town’s police force.

That grand jury decision — along with the decision not to indict a New York police officer in the death of Eric Garner, an unarmed black man stopped for selling loose cigarettes — sparked nationwide protests against racial profiling and police brutality. The overwhelming force with which police responded to those protests also brought the issue of police militarization back into the headlines.

A federal civil rights investigation into Officer Wilson’s conduct is ongoing but there have been reports that the US government is unlikely to bring charges against him.

The national debate about police violence spilled over into the recent Grammy awards, where performers took the opportunity to reference the protest movement that has arisen since Michael Brown’s death.

The back up dancers for both Pharrell Williams and Beyoncé, at one point, held their hands in the air mimicking the gesture of surrender that some witnesses testified they saw Michael Brown use before he was shot. Singer Prince also referred to the movement’s most recognizable slogan when presenting an award for Best Album to Beck, "Albums still matter. Like books and black lives, they still matter."