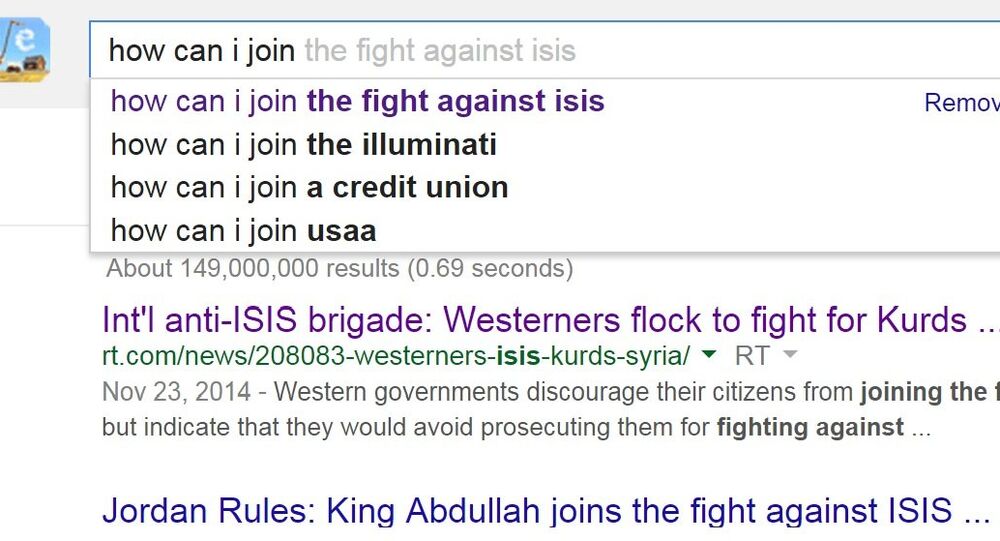 Google announced that it will delete the “auto suggestion” for the search “How can I join ISIS?” after the technology behemoth had been playing an unwitting partner in ISIS recruitment.

Autosuggestions are automatic suggestions for searches based on common and popular searchers computer users enter into a search engine. Google will offer a number of choices for endings for a search as a searchers begins typing a phrase or sentence.

© REUTERS / Kacper Pempel/Files
Google Hiring 'Army' of Arab Speakers to Fight Jihadi Recruitment
Many autosuggestions are can prove helpful or humorous, such as in a quick test, a search beginning with “How can I…” resulted in the top suggestion “How can I keep from singing?”

However, Google was informed that one particular search was not funny. When residents of the United States and the United Kingdom entered “How can I join…” they were given the option of choosing “How can I join ISIS?” from the drop down search suggestion list. In one documented case, it reached as high as the fourth option.

"ISIS" is one of several names used by ISIL, or the "Islamic State."

British media alerted Google to the issue last week and Google has now announced they will remove the possibility of that autosuggestion. In the U.S. options now include “How can I join a credit union?” and “How can I join the Illuminati?” which take the third and second spots respectively.

© AFP 2020 / GEORGES GOBET
Google Expands Access Limits to Services in Crimea
However, those looking for combat adventures in the Middle East are not to be totally dismissed with the number one option now appearing to be “How can I join the fight against ISIS?”

Coincidentally, when choosing that option, the top link is an RT.com article headlined “Int'l anti-ISIS brigade: Westerners flock to fight for Kurds.”

The fact that the “How can I join ISIS?” ranked so high on the autosuggestion list exemplifies the Islamic State’s adept use of social media. The organization that seeks to create a state in Syria and Iraq ruled by an unpopular and repressive form of Sharia law has successfully used YouTube, Instagram and Facebook as recruiting tools.

Additionally, the autosuggestion would not have ranked so high unless it was a common search made by American and British residents.

Google has said that its autocomplete's algorithm-based suggestions are based on "a number of factors, including the popularity of search terms,” using "200 unique signals or 'clues' that make it possible to guess what you might really be looking for,” including geographical location and prior relevant search terms.