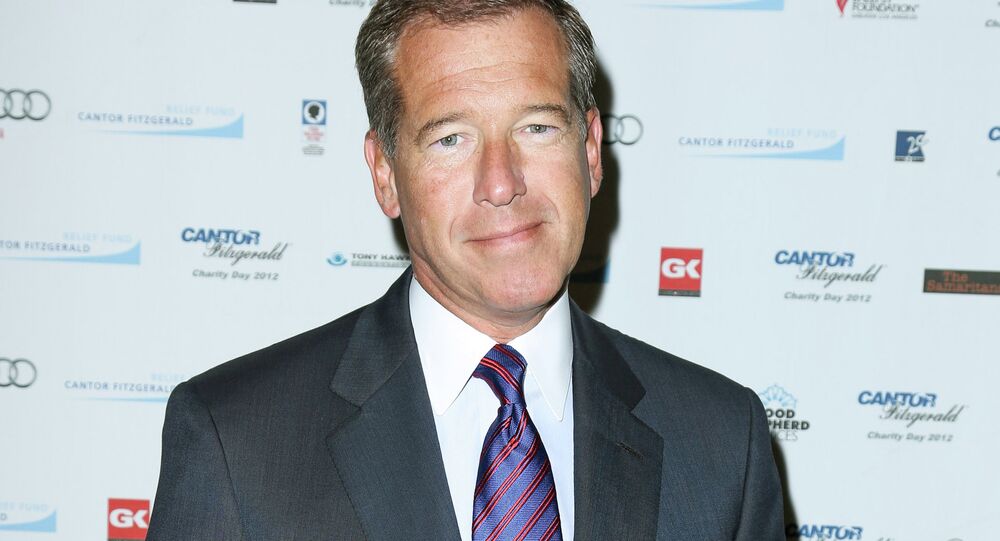 After being called out by a number of soldiers for false claims he made about being shot down in the Iraqi desert, NBC Nightly News Anchor Brian Williams has recanted his story and apologized. Sort of.

Emblazoned across a jumbotron screen hanging high above Madison Square Garden is a photo of a dusty, though well primped, Brian Williams. He holds his arm around Command Sergeant Major Tim Terpack. An announcer tells how Terpack saved Williams’ life 12 years ago, after the anchor’s Chinook helicopter was struck by RPG fire and forced down.

This was aired Friday night as part of an NBC News tribute to Terpack, but it’s a narrative that’s been pushed by the network – and Williams himself – ever since the 2003 incident occurred. It’s the kind of thing that makes great news. The most recognizable face of nightly news embroiled in the heat of war. It makes the network look brave. It makes Williams look brave.

Except it didn’t happen that way. While a helicopter did, in fact, take RPG fire, Brian Williams was not onboard.

“I made a mistake in recalling the events of 12 years ago,” Williams told his Nightly News audience Wednesday night. “I want to apologize.”

To be clear, this wasn’t a small flub. Williams didn’t misremember the exact dates, or forget who was or wasn’t present. For the past 12 years Williams has been saying he went through a near-death experience, only to finally realize that, actually, he didn’t.

Williams now claims that he was actually in a helicopter behind the one that was shot down, but this proves inaccurate as well. A number of soldiers who were aboard the Chinooks that came under attack said Williams and his crew arrived at the crash 30 to 60 minutes after the RPG attack.

“It was something personal for us that was kind of life-changing for me. I know how lucky I was to survive it,” said Lance Reynolds, flight engineer aboard the helicopter which came under fire. “It felt like a personal experience that someone else wanted to participate in and didn’t deserve to participate in.”

In 2003, after the incident occurred, NBC broadcast a report entitled, “Target Iraq: Helicopter NBC’s Brian Williams was Riding in Comes Under Fire.”

Mike O’Keeffe, who was a door gunner on the damaged helicopter, said that report always bothered the soldiers who were actually under fire.

“Over the years it faded,” O’Keeffe said of Williams’ most recent retelling. “And then to see it last week it was – I can’t believe he is still telling this false narrative.”

“I would not have chosen to make this mistake,” Williams said Wednesday night. “I don’t know what screwed up in my mind that caused me to conflate one aircraft with another.”

We’re not sure either, but many have wondered what other seminal moments in history Brian Williams may have misremembered himself into.

Hard to say if his apology will mean much to the soldiers who were actually involved in the attack, but the incident has put a definite smear on the reputation of one of the most trusted names in news.