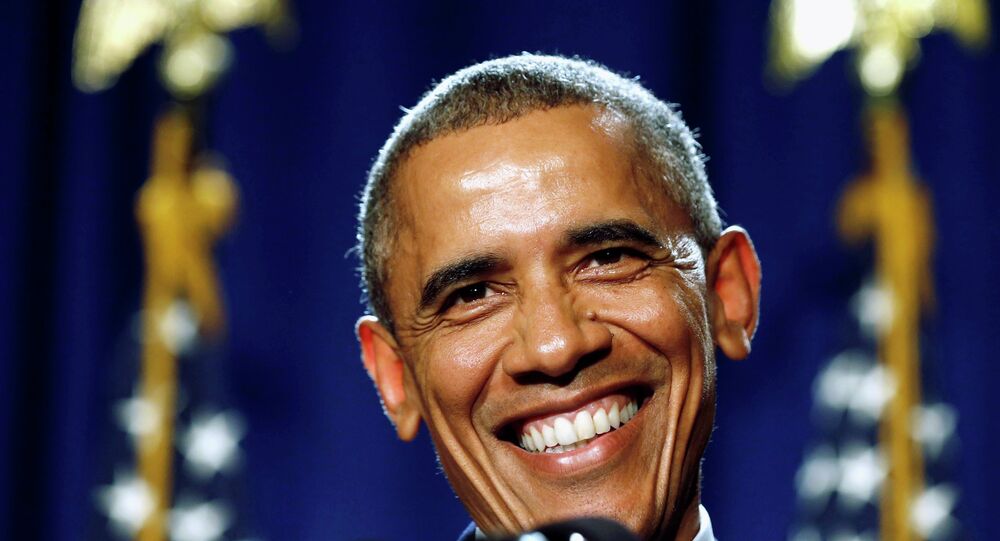 The US president is set to announce his 2016 budget on Monday, in which his administration wants to use tax on the overseas earnings held offshore by American business to pay for infrastructure projects at home.

© REUTERS / Larry Downing
Obama Proposes Nearly $4 Trillion Budget for 2016
MOSCOW, February 2 (Sputnik) – The White House has released details of President Obama's budget for the 2016 fiscal year beginning October 1, in which the president proposes an ambitious six-year program of infrastructure projects, to be funded by a one-time tax on foreign earnings held abroad by US companies.

"These investments will increase infrastructure funding by over a third, support hundreds of thousands of American jobs, and lay the foundations for long-term economic growth," the AP reports the White House said on Sunday, adding that the projects will be worth $478 billion over the six year period, and comprise the building and upgrading of roads, bridges and other transport systems.

The Obama administration plans that half of the costs of the works will be paid for by "a one-time 14% transition tax on the up to $2 trillion of untaxed foreign earnings that US companies have already accumulated overseas." Accompanying the measure is a broader reform of the corporate tax system, which will close a loophole by which companies are able to defer indefinitely paying the corporation tax of 35 percent on earnings made abroad which are not brought into the US.

In an interview prior to Sunday's Super Bowl, Obama said that he expected a dialogue with Republicans over how to pay for the infrastructure plan. "I think Republicans believe that we should be building our infrastructure. The question is, how do we pay for it? That’s a negotiation that we should have," The Washington Post reports the president as saying.

© REUTERS / Kevin Lamarque
Obama Admits US Role in 2014 Ukraine Coup
"One of the things I’ve learned over the last six years is that when I tell the American people very clearly what direction I think the country should go in, sometimes people change their minds. Even Republicans occasionally start agreeing with me — although sometimes a little bit later than I’d like."

The WSJ reported on Monday that some Republicans, who control both Houses of Congress, were already declaring scepticism about the tax proposal. "Changes to our tax code just to fund more spending by our already bloated government is not the way to boost our economy and encourage job creation," Congressman Pat Tiberi told the paper. However, Congressman Marlin Stutzman voiced support for the idea of investing more in infrastructure. "I can’t think of a better place to invest right now than in infrastructure. It’s a desperate need we have," said Stutzman, who sits on the House Budget Committee.

According to the details leaked on Sunday of the proposed budget, which must be approved by Congress before it can go into effect, the current 35 percent top rate of corporation tax would drop to 28 percent, while a 19 percent tax would be levied on future foreign profits.

The WSJ journal reports that for 2013, the US corporation with the biggest indefinitely reinvested earnings kept offshore was the General Electric conglomerate with $110 billion, followed by Microsoft with $76.4 billion. Third and fourth were pharmaceutical giants Pfizer and Merck, with $69 billion and $57.1 billion respectively, while Apple was fifth on the list, with $54.4 billion.

US Lawmakers Urge Obama to Recall Plans for Offshore Drilling