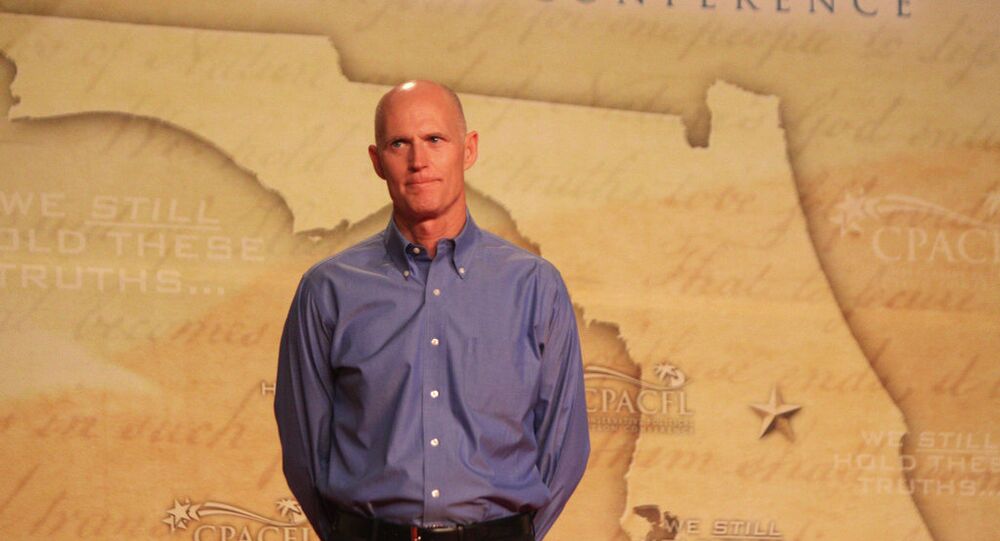 The former head of Florida’s Department of Corrections is singing like a canary and the governor of the Sunshine State is probably not going to like what he has to say.

© Flickr / Jordi Escuer
S. Florida to Tallahassee: So Long… and Thanks for All the Fish!
Mike Crews is a former law enforcement officer who was in charge of the state’s largest agency and he says the system was one gigantic hot mess and the governor didn’t care. In one particular incident in July of last year, Crews said he was told to “take a bullet for the governor” who was in the middle of a reelection campaign

He was told the governor didn’t need to be burned by the firestorm over allegations that a mentally ill inmate had died in a scalding shower that was part of a punishment by Dade Correctional Institution officers in Miami. The Justice Department was investigating that and a series of other questionable deaths, civil rights groups were in an uproar, and Crews says that Gov. Rick Scott’s people were throwing Crews under the bus.

© AP Photo / Curtis Griffin
New York Asks Feds to Probe Inmate Death at Rikers
Crews said the governor’s office was more concerned about press releases and personnel they didn’t like than with conditions in the state’s prisons, which Crews said were rundown and dangerous.

“I guess you can say they were more concerned with the crafting and writing of news releases and that had little to do with the reality of what needed to be done to keep the institutions safe and secure,’’ Crews told the Miami Herald.

Crews said he had been forced to cut back and let go of so many corrections officers that the overtime budget for those remaining to pick up the slack had skyrocketed. In some prisons conditions were so bad that even the security systems were always breaking down and personnel couldn’t keep an accurate count of inmates. While the prison population went up, Crews said, the number of officers charged with guarding them went down. Agency vehicles, Crew said, were so old and overworked that corrections officials worried they would break down on the highways and inmates would escape.

SNAPSHOT/NBC6
Florida Cops Caught Using African-American Mugshots for Target Practice
Additionally, salaries were so low that it was hard to keep guards from participating in contraband rings when they could make more money selling cigarette packs to the inmates.

The investigations into the dismal conditions and the deaths of inmates made the governor’s office paranoid, says Crews, so paranoid that the agency was instructed to not write anything down and rather phone Crews with any issues and tell him verbally so there wouldn’t be a paper trail.

Crews was the first corrections secretary in as many years, and even though Crews said he asked for more money for staff and to upgrade facilities, he was shot down every time, and had to make do, even asking hotels for donations of bed sheets and other supplies.

© AP Photo / Sue Ogrocki
Oklahoma and Florida Prepare Lethal Injections After Botched Execution
Crews said the stress of the job was taking a toll, and after the November election, he declined an offer to stay on, taking instead a job with the Florida Sheriffs Insurance Institute, a group that provides workers compensation insurance to sheriff’s offices.

While not addressing Crews’ comments directly, a Scott spokesman said the governor is asking the state legislature for more money in the budget for the corrections agency.