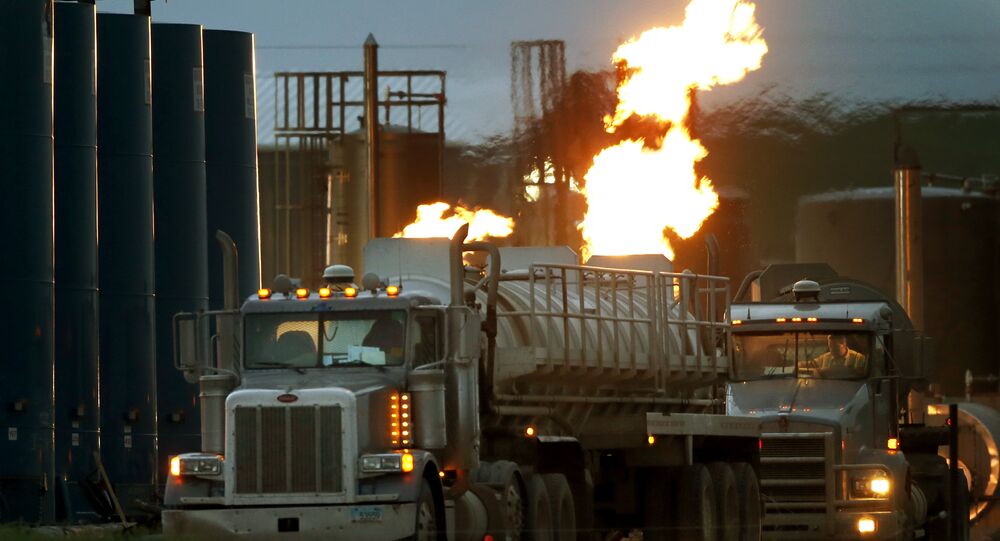 North Dakota’s oil industry is seeking to change the state’s radioactive waste disposal laws in a mad dash to save money in the wake of dropping oil prices.

Waste from hydraulic fracturing — better known as fracking — becomes slightly radioactive in the process, which churns up isotopes deep underground.  Current law dictates it must be trucked out of state, as landfills in North Dakota do not accept radioactive materials.  The transport costs energy companies big money.

Officials are not sure exactly how much waste is generated by fracking activities in the state, because they were only required to start tacking last year, and the final reports are not due until next month. However, it is estimated somewhere between 27 and 70 tons every day, according to a Reuters report.

The most common form of this waste is a filter “sock,” a mesh tube through which fracking waste water is pumped and filtered, before it is sent back into the ground. The sock collects sand, pebbles and other impurities that, in the fracking process, become slightly radioactive.

The industry estimates that allowing local North Dakota landfills to accept this material could save it at least $10,000 in transportation costs per truckload. With the 11,942 active wells in the state, and the estimated 15-cubic yard dumpster worth of radioactive waste each one produces each year, officials believe they could save $120 million a year.

"You're talking hundreds of dollars to transport versus tens of thousands" of dollars if regulations are changed, said Kari Cutting, vice president of the North Dakota Petroleum Council.

Supporters claim changing disposal regulations would also make North Dakota's energy industry more self-reliant. Without the change, if other states (like Utah, California, and Washington, which currently accept North Dakota’s fracking waste,) were to stop taking it, oil production there would most likely halt.

Critics of the plan aren’t convinced.  Protesters gathered outside a hearing in Williston last week — one of three held across the state to discuss the proposal — holding signs reading  "Protect Health Not Oil's Wealth!" and decorated with radioactive symbols.

"The only reason we're doing this today is to cut the oil industry's costs," said Darrell Dorgan, spokesman for the North Dakota Energy Industry Waste Coalition, an environmental group.