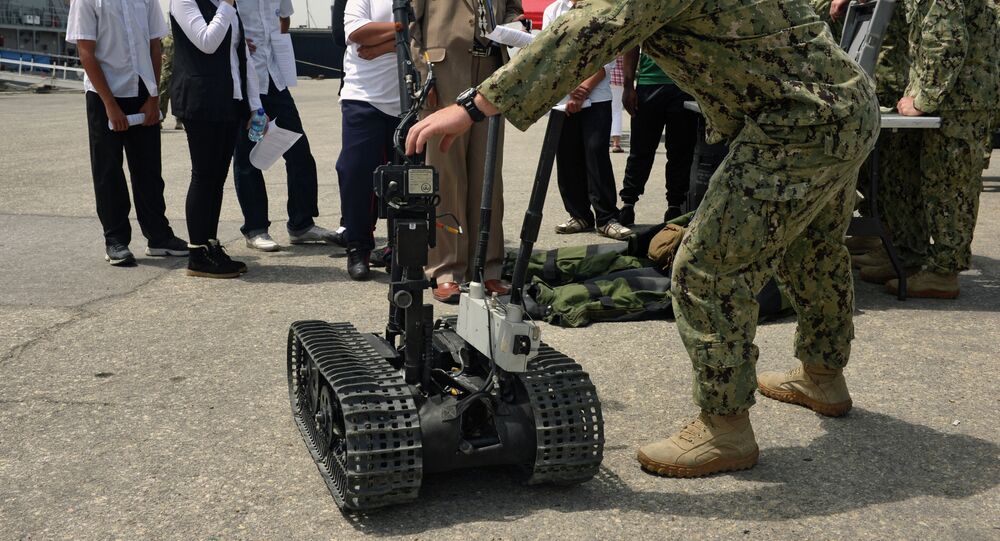 The US Navy unveiled plans to use robots to improve military-training systems.

© AP Photo / US Navy, John F. Williams
US Navy Prepares to Showcase Hi-Tech Military Hardware
NEW YORK, January 28 (Sputnik) – The US Navy unveiled plans to use robots to train marine forces with the launch of a research project at the University of Central Florida, military officials have announced in a statement.

"The way people react to and interact with the different surrogates in this study, is crucial to understanding how we can improve our military-training systems," Dr. Peter Squire, a program officer for the Office of Naval Research, has said in a statement.

According to Squire, US Marine Corps training concepts continue to "merge virtual and live components to create the most realistic, effective and affordable training for marines".

© REUTERS / Gene Blevins
US Navy Launches Communications Satellite Using Russian Made Rocket Engine
Researchers at the University of Central Florida have placed a robot in the lobby of the university's Institute for Simulation and Training. It will be controlled by a human operator in another room, and interactions between students and the robot will be observed as part of the study.

Results of the study will be used to determine how robots can be utilised to train infantry and other forces in the US Marine Corps at a state-of-the-art military training facility at Camp Pendleton in California.

On February 4-5 the US Navy will demonstrate new military gear at the Naval Future Force Science and Technology EXPO in Washington. A bipedal humanoid robot designed to assist sailors, a fire-fighting robot and a helicopter drone will be showcased to the public, along with a range of other state-of-the-art technologies.