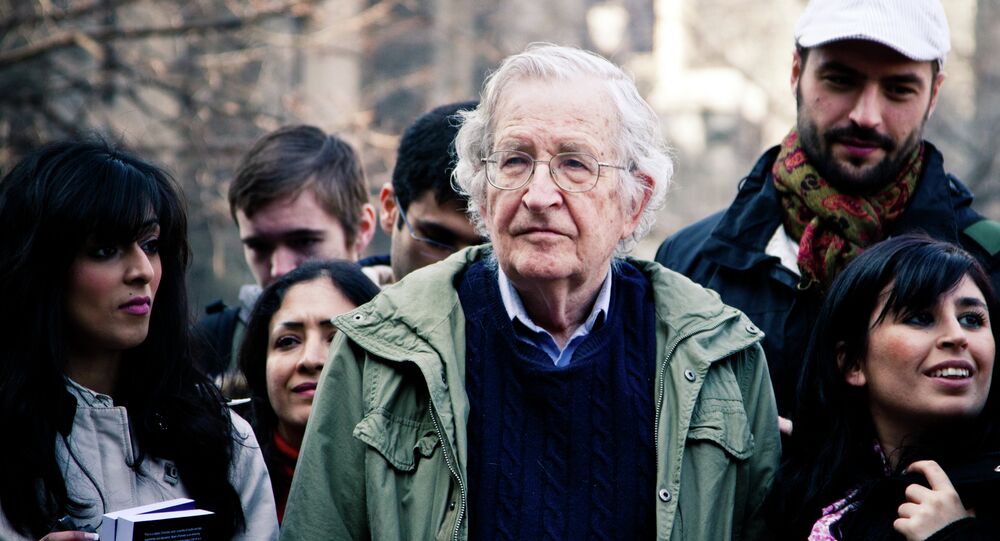 Despite earning six Oscar nominations, including Best Picture, the hit film has its share of detractors. Many accuse the movie of manipulating key facts in the true story of former Navy SEAL Chris Kyle. Among these voices, count linguistic virtuoso Noam Chomsky.

A key plotline in the 2009 film, “Inglourious Basterds,” tells the story of Fredrick Zoller, a fictional German sniper who manages to kill over 200 allied soldiers while trapped inside a small French village. For his efforts, Hitler’s SS produces a propaganda film called “Nation’s Pride,” based on Zoller’s story, allowing audiences to cheer and clap with every gunshot.

It’s a film within a film, a satirical look at self-aggrandizing groupthink. But for Noam Chomsky, MIT’s distinguished man of letters, the new movie “American Sniper,” based on the autobiography by Chris Kyle, could be that same kind of propaganda, without the self-awareness.

At an event hosted by The Baffler, Chomsky begins his discussion by referencing a New York Times review which doles out unending praise for the new movie directed by Clint Eastwood.

“America’s coastal intelligentsia, which has busied itself with chatter over little-seen art dramas while everyday Americans showed up en masse for a patriotic, pro-family picture which broke all attendance records in its opening,” the review reads.

Chomsky counters that this “patriotic, pro-family picture” rallied the masses based on its plot, about “the most deadly sniper in American history, a guy named Chris Kyle, who claims to have used his skills to have killed several hundred people in Iraq.”

He goes on to quote Kyle, and points out many of the ways in which his us-vs.-them mentality are problematic.

“I hated the damn savages I’d been fighting,” Chomsky quotes Kyle. “Savage, despicable, evil – that’s what we were fighting in Iraq. That’s why a lot of people, myself included, called the enemy savages.”

Warner Bros.
Promotional poster for the movie, depicting its hero - and ultimately his actions - shielded by the American flag.

Chomsky is hardly alone in these criticisms. Many of those “coastal intelligentsia,” – of which any New York Times film critic must surely be a part – have pointed out the movie’s questionable politics. Some have accused “American Sniper” of sugarcoating Kyle’s character, depicting him as a man troubled by deep moral questions about killing, when the real Kyle may not have suffered in such a way.

“Now that [sniper] mentality helps explain why it’s so easy to ignore what is most clearly the most extreme terrorist campaign of modern history, if not ever – Obama’s global assassination campaign, the drone campaign, which officially is aimed at murdering people who are suspected of maybe someday planning to harm us,” Chomsky said.

Perhaps working in Chomsky’s favor was Eastwood’s strange behavior at an awards ceremony in 2005, which also showed a certain tone-deafness toward violence. Another director, Michael Moore, was present that night for his documentary “Bowling for Columbine,” about American gun culture. Eastwood addressed his fellow director during an acceptance speech.

“Michael Moore and I actually have a lot in common – we both appreciate living in a country where there’s free expression,” Eastwood said. Waved flag. Spat. “But Michael, if you ever show up at my front door with a camera – I’ll kill you. I mean it.”