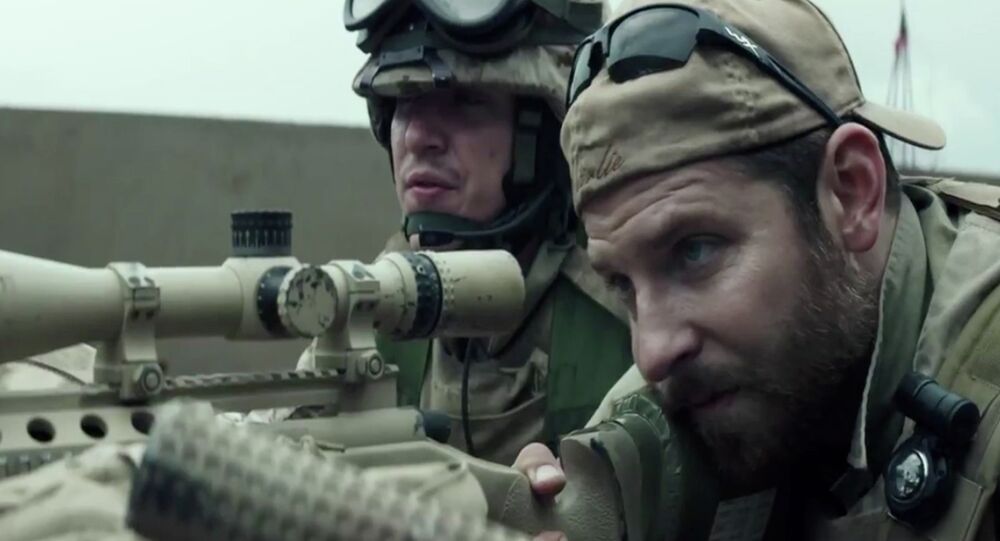 It’s been breaking box office records since it first opened, but American Sniper has also been breaking another record and a nefarious one at that: anti-Muslim and anti-Arab threats, and groups who represent those communities want Hollywood to weigh in. © Wikipedia / Cpl. Damien Gutierrez for U.S. Marines
The real Chris Kyle signs copies of his book at Camp Pendleton in 2012
The American-Arab Anti-Discrimination Committee (ADC) says the number of threats against them has tripled since the movie premiered nationwide on Christmas Day, and they’ve written letters to actor Bradley Cooper and director Clint Eastwood, asking them to condemn the threats.

“We want Mr. Eastwood and Mr. Cooper to say, ‘Don’t use our film to promulgate hatred or bigotry. Don’t use our film to push hate and bigotry and use it as a platform for these views,” said Abed Ayoub, ADC’s National Legal and Policy Director. “If they want to go further, they can say Arabs in America are just as American as the next person.”

Eastwood and Cooper haven’t responded yet.

Oh, and Iraqis are called "savages" throughout the film.

The ADC says that the American Sniper movie, which raked in a record $90 million its first weekend and continues at the top of box office sales, has blown up social media and unleashed a rash of hatred-filled comments, calling it a “drastic increase.”

The film is loosely based on former Navy Seal sniper Kyle Cooper, famous for having the highest documented single-kill count in U.S. military history.  The ADC argues that the film’s very pro-American depiction of the war in Iraq means some people are leaving the theater and spewing hateful rhetoric online.

Even former vice presidential nominee Sarah Palin got in on the act, tweeting a picture of her holding up a sign that said “Fuc_ You Michael Moore,” referring to the film director who had called snipers “cowards.” Moore said he wasn’t specifically referring to Kyle.

Here's a tribute to you @MMFlint Michael Moore. Share it and make it trending #michaelmoore pic.twitter.com/1UN9KJfPPJ

“Hurt Locker made $17 million because it was a little ambiguous, and thoughtful,” Maher said. “And this one was just, ‘American hero! He’s a psychopath patriot, and we love him.’”

Kyle, who did four tours of Iraq, was killed in 2013 at a shooting range in Texas by a former Marine who suffers from mental illness and post-traumatic stress disorder (PTSD). The trial of Eddie Routh for the murder of Kyle begins next month.