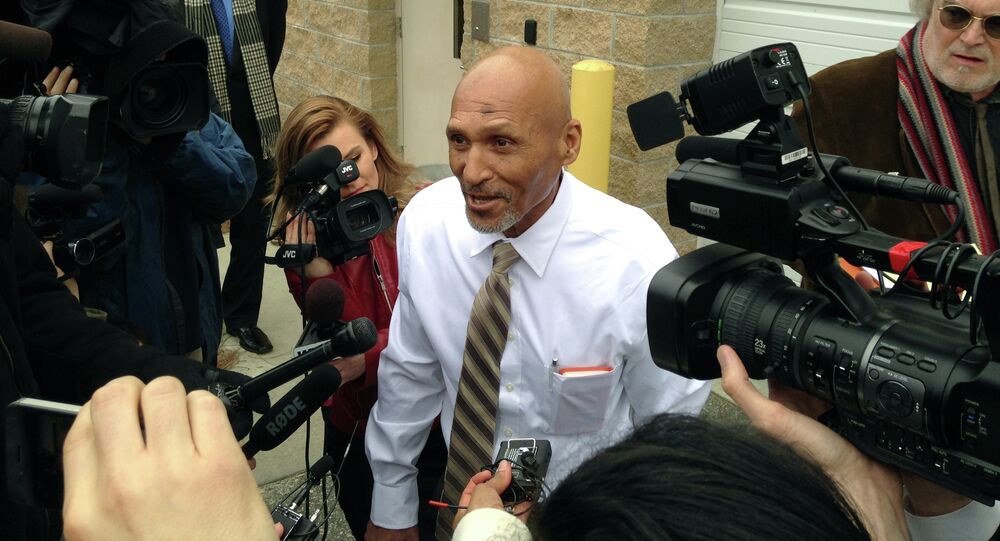 A man, wrongfully convicted of two murders, spent nearly 40 years in a North Carolina jail before he was declared innocent and released.

© Photo : facebook.com/freebarrettbrown
US Journalist Covering Anonymous Gets Five Years in Prison for Sharing Link
MOSCOW, January 24 (Sputnik), Ekaterina Blinova — A man who has spent almost 37 years in a North Carolina prison, serving a lifelong term for a crime he didn't commit, was exonerated and released on Friday.

"Joseph Sledge, who was wrongfully convicted in 1978, said he feels wonderful about his freedom. He is now 70-years old," CNN reported.

The man, wrongfully charged with the murder of Josephine Davis and her daughter Aileen Davis in 1976, had repeatedly appealed for reconsideration of his case, insisting he was not guilty of the crime. However, his pleas remained unnoticed. Eventually, the North Carolina Innocence Inquiry Commission launched an investigation in Sledge's case.

Sledge's attorney, Christine Mumma, revealed that crucial DNA evidence had been lost for several years, misplaced by court clerks. Fortunately, the missing envelope containing hair, allegedly belonging to a killer, was accidentally found on a high shelf of a vault.

© AP Photo / Rob Griffith
US Admits That Innocent Man Was Tortured in Guantanamo for Five Years
"I understand those shelves were very high, but there was a ladder in that room," noted Mumma, as cited by the Associated Press.

The DNA testing provided compelling evidence that excluded Sledge as a suspect. Remarkably, Herman Baker, a key witness who had testified against the man withdrew his testimony in 2013. He said he lied at the 1978 trial, told by authorities what to say in the court. He also admitted he was promised leniency in his drug case in exchange for the false accusation.

Joseph Sledge was totally exonerated of any blame by a special three-judge panel,  declared innocent of the killings and released from prison.

It should be noted that almost 325 post-conviction DNA exonerations have been registered nationwide in the United States, according to The Innocence Project.

"Going home. Relaxing. Sleeping in a real bed. Probably get in a pool of water and swim for a little while," Sledge told reporters answering their question about his plans, while walking out of the prison, where he spent nearly 40 years.

"When you're conscious of something you didn't do, you can live with yourself. It's between you and your maker," he added.

Teenage American Girl Gets Four Years for Trying to Join IS