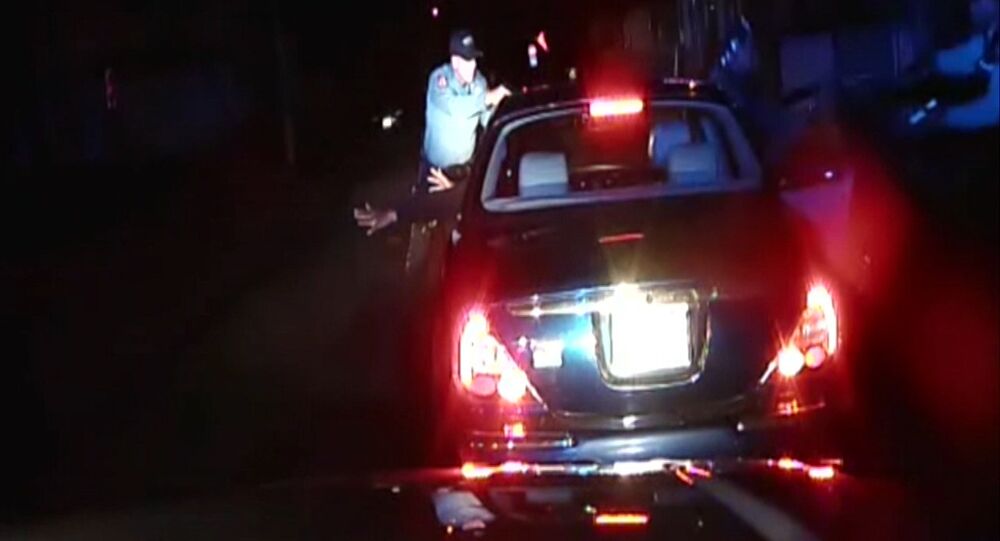 New Jersey police have released a video of two police officers shooting and killing a black man as he tried to get out of a car with his hands up.

MOSCOW, January 22 (Sputnik) – New Jersey police have released a video from a police dashboard camera showing officers shoot a black man to death as he exited a car with his hands up.

The accident took place on December 30, 2014, but the video of the shooting has only just been released.

The newly-released footage shows how two police officers, Braheme Days and Roger Worley, pull over a car in the town of Bridgeton for allegedly not halting at a stop sign.

One of the officers asked the driver to show them his driver’s license.

But the tone of the conversation suddenly changed after one officer warned his partner about seeing a gun in the glove compartment.

The officers then shouted at the driver and the passenger to show them their hands. First, the driver’s left hand is visible and then both of them can visibly be seen out of the window. The hands of the passenger are not clearly seen at first.

Officer Braheme Days keeps screaming over and over at the passenger, Jerame Reid: “Show me your hands!” and “If you reach for something, you’re going to be [f…] dead!”

The officer appears to reach into the car and remove the gun. But then Reid, apparently disregarding the officer's order not to move, steps out of the car with his hands, appearing to be empty, raised at shoulder height and is shot, at least six times.

“The video speaks for itself that at no point was Jerame Reid a threat and he possessed no weapon on his person," AP quotes Walter Hudson, chair and founder of the civil rights group the National Awareness Alliance, as saying.

The driver, Leroy Tutt, is also seen getting out of the car and laying down on the ground.

Both officers have been placed on leave while the Cumberland County prosecutor’s office is investigating the accident.

The shooting comes after months of turbulent demonstrations and violence over the killings of unarmed black men by white police officers in New York City and Ferguson, Missouri.

Activists are calling on the prosecutor to transfer the case to the state attorney general.

Shooting in the US: Police Officer Kills 12-Year-Old Boy