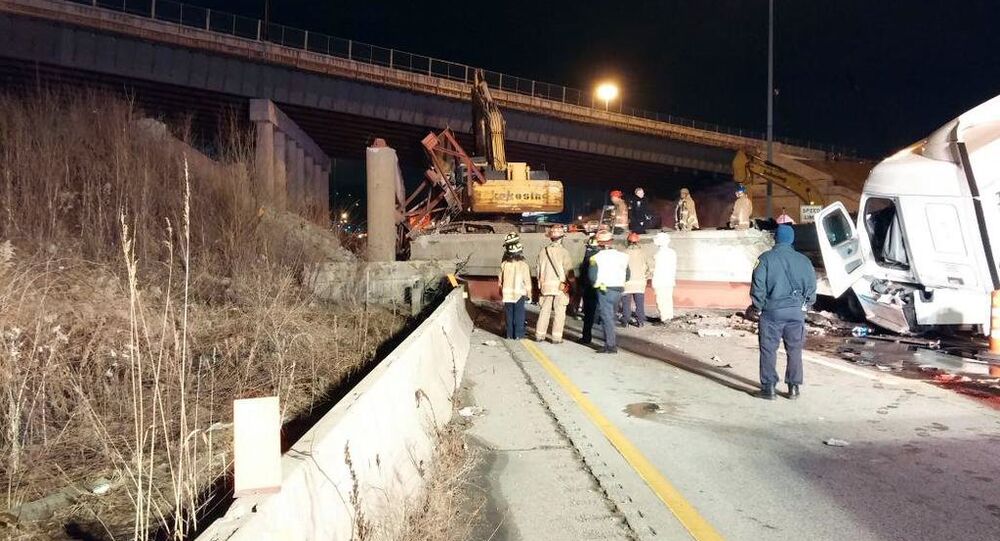 Highway Overpass Collapse in Cincinnati Leaves One Dead, One injured

A highway bridge in Cincinnati was undergoing demolition at the time of the incident.

MOSCOW, January 20 (Sputnik) — A highway overpass collapsed on the road below in Cincinatti, Ohio, on Monday, leaving a construction worker dead and a driver injured, city’s Fire and Emergency Medical Services Department said on Twitter.

Panorama view of the bridge collapse on south I-75 in Cincinnati. This was the old northbound off ramp to Hopple St pic.twitter.com/yMOEcP1Jxp

Jeffrey Blackwel, chief of Cincinnati police, said the driver was "very lucky", according to the New York Daily News. "A matter of seconds and his fate would probably have been different," said Blackwell, as quoted by the media outlet.

The incident took place at the Hopple Street exit at approximately 10:30 p.m. (3:30 a.m. GMT). According to the Cincinnati Fire and EMS, the old Hopple bridge was undergoing demolition when it collapsed.

To confirm the bridge that collapsed was undergoing demolition at the time of incident, this is NOT the new bridge pic.twitter.com/H6sAaRNsJv

The bridge at top is the new Hopple St, the bridge that collapsed was part of the old northbound off ramp to Hopple pic.twitter.com/7HZTRlC5dB

The local authorities closed the southbound lanes of I-75 until further notice.

SB I-75 at Hopple could be closed for 2 days. Plan ahead, leave early, expect delays.

At Least 10 Killed After Prison Bus Hits Train in Texas