US Senator Bob Corker claims that the US Agency for International Development has put America’s national security at risk by continuing to do business with corrupt and underperforming reconstruction contractors in Afghanistan.

WASHINGTON, January 17 (Sputnik) — The US Agency for International Development (USAID) has put America’s national security at risk by continuing to do business with corrupt and underperforming reconstruction contractors in Afghanistan, US Senator Bob Corker said in a letter to USAID Administrator, Dr. Rajiv Shah, on Friday.

“USAID continues to put U.S. tax dollars and national security objectives at risk by doing business with organizations that consistently fail to meet their obligations and engage in potentially illegal and unethical activities,” Corker said. “Given that USAID programs in Afghanistan are a critical component of US national security policy in the region, including addressing issues of governance, rule of law, and corruption, USAID's continued reliance on such organizations is highly questionable at best.” 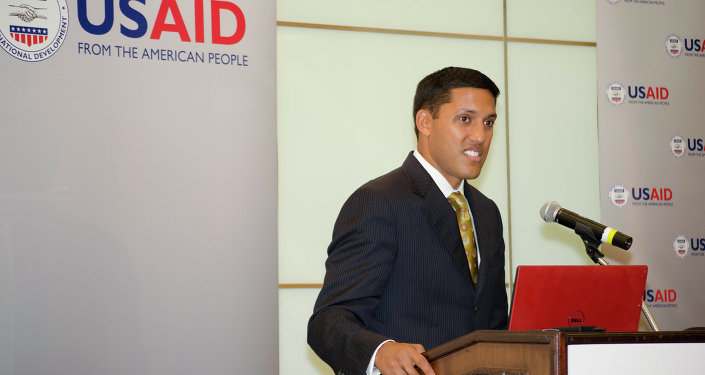 © Flickr / USAID U.S. Agency for International Development
USAID Head Announces Resignation in Mid-February 2015
The two contractors in question, International Relief and Development (IRD) and the Louis Berger Group, Inc. (LBG), have defrauded American taxpayers of “tens of millions over two decades,” in Afghanistan, according to Corker, while the firms’ senior executives and former employees have been indicted on criminal charges ranging from bribery, fraud and gross overbilling.

According to the Special Inspector General for Afghanistan Reconstruction (SIGAR), from 2002 to June 2013, IRD and LBG each received approximately 8 percent of a total $13 billion in contracts during that period, Corker said.

He also called on President Barack Obama to explain why these firms continue to be among the top recipients of US reconstruction projects and urged USAID leaders to conduct a thorough review of their contracting practices.

“By January 30, 2015, please report back the result of your review including whether suspension and debarment proceedings should immediately be initiated against LBG, IRD, or other similarly-situated contractors and describe in detail your plan for getting USAID's oversight of its contractors back on track,” Corker’s letter also states.

The United States has appropriated overall $104 billion for relief and reconstruction in Afghanistan since 2002. In quarterly reports filed throughout 2014, SIGAR identified billions of taxpayer dollars wasted on projects, including a failed war on opium, investments in transport planes that were never used, poorly-designed prison facilities, contractor fraud and mismanagement of funds by the Afghan government.