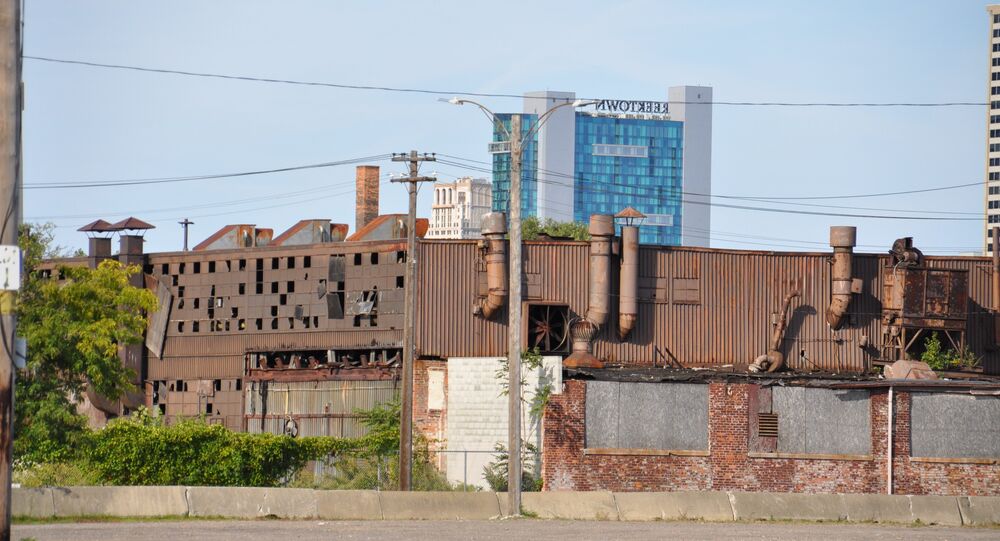 The recovery in manufacturing has only been temporary rather than structural, and generally unaffected by the shale gas revolution.

© Flickr / mi chiel
Magic Growth Numbers From US Government
MOSCOW, January 12 (Sputnik) – The idea that the United States is going through a “manufacturing renaissance,” although optimistically touted  in the media and by experts, does not reflect reality, write the authors of a new report from a reputable Washington, D.C. think-tank, the Information Technology and Innovation Foundation (ITIF).

The authors of the report claim that the highly publicized media narrative of a rebirth in America’s manufacturing sector is based on misleading interpretations of data that in fact paint a much bleaker picture of a temporary recovery within the context of the economic cycle, rather than structural growth.

America’s unprecedented decline in manufacturing employment in the 2000s, which was caused not by increases in productivity, as was the case in previous decades, but rather outsourcing and decline in output, led to trade deficits in sectors such as high-tech production, which is typically brought up as an example of American manufacturing, write the authors.

© Flickr / Phil Roeder
US Economy Faces 'Headwind' Challenges: White House Official
“The lion’s share of growth that has occurred appears to have been driven by a cyclical, rather than structural, recovery, and as such may represent only a temporary trend,” the report states, pointing out that even compared to previous recessions, the recovery has only been partial, with both output and employment below 2009 levels when adjusted for lower costs achieved through outsourcing.

The authors also take a special look at what they believe is a myth of “reshoring” – companies that once outsourced production overseas bringing it back to the United States.

The authors point out is that rising labor costs in China do not mean an end to outsourcing of jobs, as Chinese wages are growing slower than its labor productivity, and that even if official Chinese statistics are to be believed, “the average Chinese laborer would still earn just roughly $4.40 an hour, a scant 12 percent of U.S. wages.”

© Fotolia / marrakeshh
Falling Energy Prices ‘Good for US Economy’: White House
Additionally, the authors point out that the shale gas revolution has not reduced energy prices for U.S. manufacturers, saying that “The benefits are concentrated in oil and gas refining and energy intensive industries.” Also, electricity costs are only marginally impacted by shale gas prices, which does not affect reshoring.

As a solution, think-tank suggests that the U.S. adopt a comprehensive economic policy that promotes manufacturing and productivity growth.

US to Invest $300 Mln in Emerging Manufacturing Technologies: White House