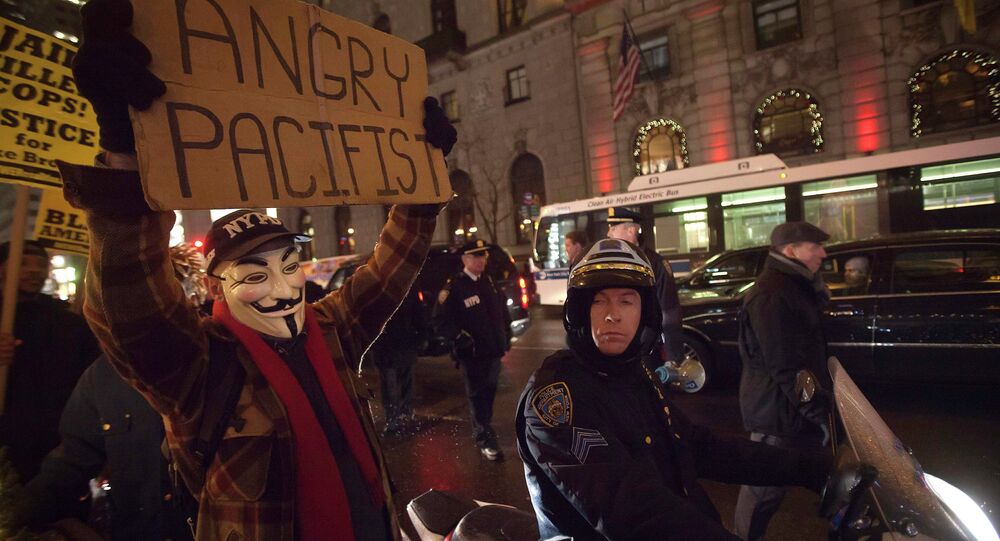 On December 20, two NYPD officers were shot dead while on duty by an African-American with a long history of arrests and alleged mental illness. The murder took place after weeks of protests across the US over police brutality.

However, the YouGov poll conducted from December 29, 2014 to January 1, 2015 revealed that 34 percent of those polled do not agree that the protestors should have any responsibility for the killing of the police officers.

© REUTERS / Mike Segar
Joe Biden Speaks at Slain NYPD Officer's Funeral as Thousands Attend Ceremony
Twenty-seven percent of those polled think that US President Barack Obama should be partly responsible for the police killings but more than half, 52 percent, disagree.

Almost 40 percent of respondents believe that New York City's mayor, Bill de Blasio, shoulders some responsibility for what happened. Thirty-six percent said it was appropriate for police officers to turn their backs on de Blasio at the funeral of one of the killed officers, while 38 percent deemed it unacceptable.

Forty percent think that the police themselves should decide the manner in which the law is to be enforced rather than elected officials.

© REUTERS / Elizabeth Shafiroff
Recognition of Ferguson Protesters by Time Magazine to Be Remarkable Moment
On December 20, NYPD officer Wenjian Liu and his partner Rafael Ramos were shot dead while on duty by Ismaaiyl Brinsley, a 28-year-old African-American with a long history of arrests and alleged mental illness.

The murder of the two police officers took place after weeks of protests across the United States over police brutality, fueled by recent grand jury decisions not to indict white law enforcers responsible for the deaths of unarmed African-Americans Michael Brown and Eric Garner. Brinsley is said to have vowed to revenge Garner and Brown's deaths on social media.