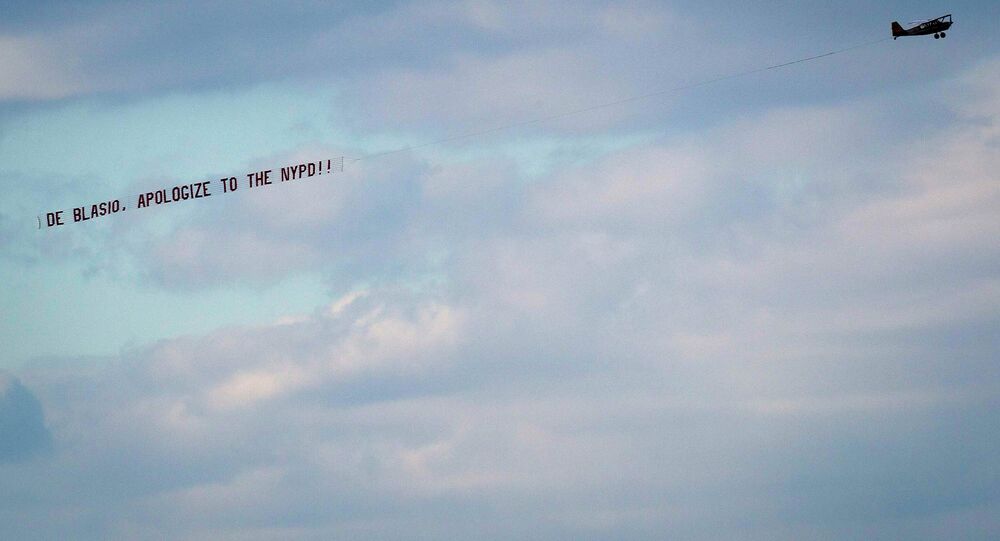 Three planes with banners calling for the resignation of Bill de Blasio will take off on Thursday and Wednesday. Retired NYPD officers blame the mayor for contributing to the deaths of policemen Wenjian Liu and Rafael Ramos by insufficient responding to protests.

© REUTERS / Stephanie Keith
Thousands to Gather at Funeral of Slain NYPD Officer Liu Sunday
A group of retired NYPD officials released a statement Monday saying that the first two banners were paid for by the group and meant "to support the brave men and women protecting our streets while protesting the glaring, dangerous disregard that Mayor de Blasio demonstrates toward the realities of public safety." Ashley Chalmers of Jersey Shore Aerial Advertising told New York Daily News that the third banner was not funded by the same organization.

The banner reading "NY SUPPORT NYPD. REST IN PEACE DETS LIU & RAMOS" refers to (NYPD) officers Wenjian Liu and his partner Rafael Ramos who were shot dead while on duty on December 20. The attacker, a 28-year-old African-American man with a history of arrests and alleged mental illness, vowed to avenge the deaths of unarmed African-Americans Michael Brown and Eric Garner who were killed by white policemen. The killing of Liu and Ramos followed weeks of nation-wide protests against police brutality and racial profiling as grand juries ruled not to indict the officers responsible for deaths of Brown and Garner.

© Fotobank.ru/Getty Images
Thousands Attend Wake of Killed NYPD Officer Ramos
At the officers' funerals, hundreds of NYPD officers turned their backs on the mayor as he was delivering his eulogy. The first plane with an anti-de Blasio slogan was seen flying above the Hudson on December 26.

According to the statement by retired NYPD officers, the group is accusing Mayor de Blasio of contributing to the officers' deaths "by putting textbook ideology ahead of reality, by hopelessly dividing the city, by compromising the work of the NYPD by creating false, slanderous impressions of its officers, by pandering to the Reverend Al Sharpton and by refusing to adequately condemn the protesters who were violating the law." Reverend Al Sharpton is an American Baptist minister and civil rights activist who organized several protest rallies after the death of Eric Garner.

Detective Wenjian Liu lifted all of us up in the too-brief time we were fortunate enough to have him with us. pic.twitter.com/Hgr8UmhsnN