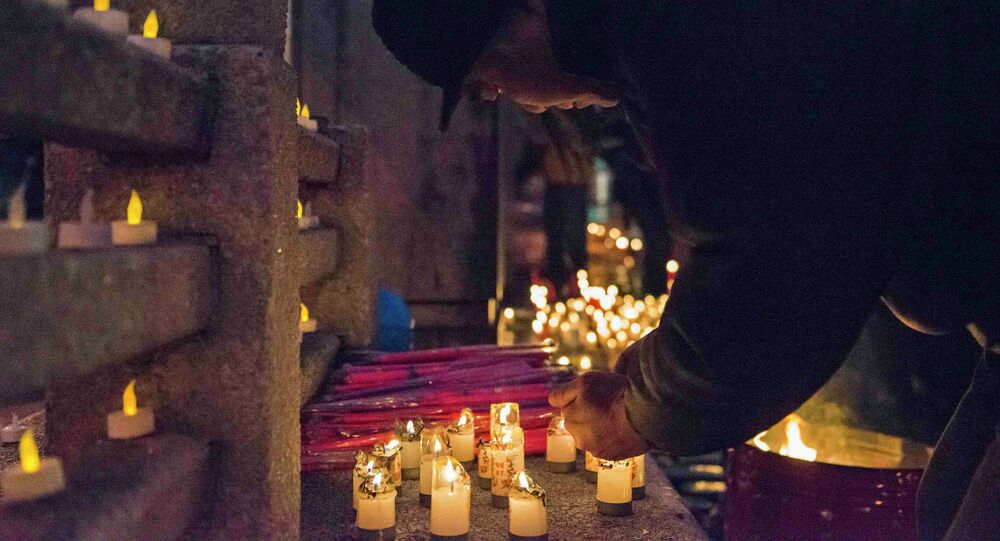 NYPD officer Wenjian Liu's funeral will be held at 11 a.m. Eastern Time (4 p.m. GMT) on Sunday at Brooklyn's Aievoli Funeral Home. Tens of thousands of people are expected to attend the funeral to pay their final respects to Liu.

© REUTERS / Mike Segar
NYPD Chief Urges Police Not to Turn Back on Mayor at Officer's Funeral
MOSCOW, January 4 (Sputnik) – Tens of thousands of people are expected to attend Sunday the funeral of a New York City police officer killed in an ambush last month, Reuters reports.

Officer Wenjian Liu and his partner Rafael Ramos were killed by Ismaaiyl Brinsley in Brooklyn, while sitting in their patrol car. Brinsley said he was seeking revenge for the death of two unarmed black men Michael Brown and Eric Garner by white police officers. After murdering the police officers, Brinsley killed himself.

Last year protests across the United States, triggered by the shooting of Michael Brown, and the murder of Liu and Ramos worsened the relationship between New York City Mayor Bill de Blasio and the police force. The mayor sharply criticized the “stop-and-frisk” tactics, employed by the police. Furthermore, during the protests in New York, de Blasio offered his support and sided with demonstrators, Reuters said. Nonetheless, de Blasio is expected to attend Liu’s funeral on Sunday.

On Saturday, under a mix of rain and snow, thousands of people, including uniformed police officers, firefighters, local officials and Police Commissioner William Bratton gathered at the wake to remember Liu, CNN said.

Mayor de Blasio also turned up at the wake. It was previously reported that the police officers, gathered to pay their respects to Liu, might turn their backs on de Blasio, the way they did last week during the funeral of Liu’s partner, NYPD officer Ramos. Instead, the police officers saluted de Blasio, as the mayor entered the funeral home for the wake, accompanied by Bratton, Reuters reported.

© REUTERS / Mike Segar
Joe Biden Speaks at Slain NYPD Officer's Funeral as Thousands Attend Ceremony
More than 20,000 police officers from around the United States gathered at the funeral of Ramos last week. When de Blasio began his speech, many police officers turned their backs in a gesture of disdain. Among other guests was US Vice President Joe Biden, who also paid tribute to NYPD officer Rafael Ramos.

“When an assassin’s bullet targeted two officers, it targeted this city and it touched the soul of the entire nation… Police officers, police families are a different breed. Thank God for them,” Biden said at the funeral of NYPD officer Ramos last week.

Liu’s funeral will be held on Sunday at 11 a.m. Eastern Time (4 p.m. GMT). For the first time, Liu’s funeral will blend a police funeral and traditional Chinese customs, as Liu is the first Chinese-American police officer killed in the line of duty in New York, CNN said.