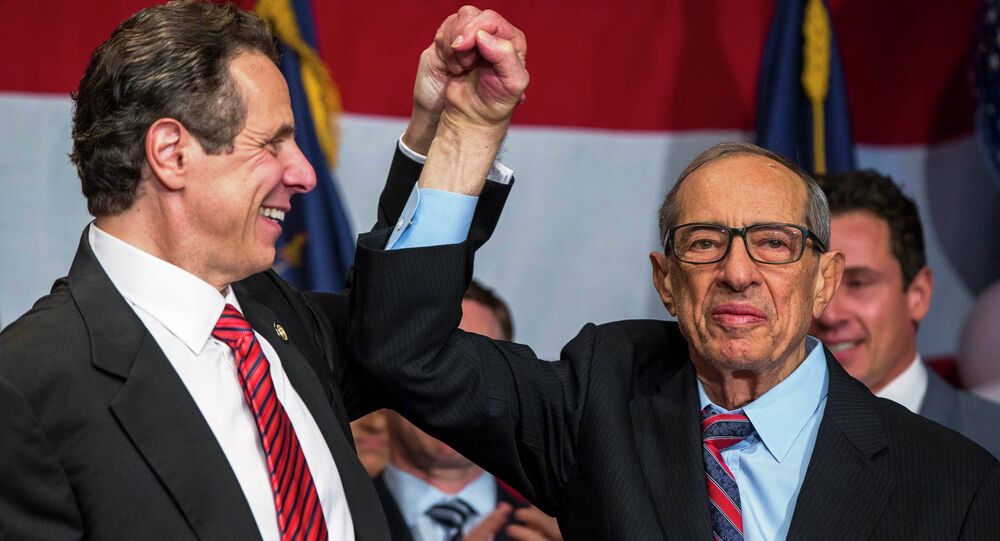 MOSCOW, January 2 (Sputnik) – Mario Cuomo, who served as governor of New York from 1983 to 1994, has died at the age of 82 of heart failure on Thursday, Reuters reports.

Cuomo "passed away from natural causes due to heart failure this evening at home with his loving family at his side," the governor’s office said in a statement. In November, he was hospitalized to treat a heart problem.

Mario Cuomo died on the same day his son Andrew was sworn in for his second term as the governor of New York. "He couldn’t be here physically today," Andrew Cuomo said of his father, as quoted by Reuters. "But my father is in this room. He is in the heart and mind of every person who is here," he stated.

US President Barack Obama praised Mario Cuomo for being an "unflinching voice for tolerance, inclusiveness, fairness, dignity and opportunity," as quoted by Reuters. "His own story taught him that as Americans, we are bound together as one people, and our country's success rests on the success of all of us, not just a fortunate few," Obama said in a statement, as quoted by NBC News.

Former US President Bill Clinton and former US Secretary of State Hillary Clinton said they were "terribly saddened by the passing of our friend Mario Cuomo." In a joint statement they stated that "Cuomo’s life was the very embodiment of the American dream."

"It was Mario Cuomo's great gift and our good fortune that he was both a sterling orator and a passionate public servant. His life was a blessing," they added.

Saddened by the passing of Mario Cuomo — a passionate public servant and the embodiment of the American dream. http://t.co/YP6Liuuj2N

"Tonight, New York has lost a giant. Mario Cuomo was a man of unwavering principle who possessed a compassion for humankind without equal," New York Mayor Bill de Blasio tweeted.

Tonight, New York has lost a giant. Mario Cuomo was a man of unwavering principle who possessed a compassion for humankind without equal.

"Few matched Governor Cuomo's eloquence when encouraging the American people to strive for a society that seeks equality of opportunity for all," Debbie Wasserman Schultz, chairman of the of the Democratic National Committee, said in a statement.

"In this time of loss, there is a measure of comfort in knowing that Mario Cuomo's legacy and his vision for America lives on in his son and throughout the Democratic Party," she added.

Mario Cuomo was born in New York to a family of immigrants from Italy in 1932. He was appointed as New York's secretary of state in 1975. In 1978, he was elected lieutenant governor of New York.

Cuomo served as governor of New York from 1983 to 1994, when he was defeated by George Pataki.

Our deepest condolences on the passing of Gov Cuomo a proud son of immigrants, possessed of a soaring intellect & a great New Yorker.

Cuomo rose to national prominence in 1984 following a keynote speech at the Democratic National Convention in San Francisco, in which he criticized Ronald Reagan for comparing the US to "a shining city on a hill".

Cuomo asserted that, "A shining city is perhaps all the president sees from the portico of the White House and the veranda of his ranch, where everyone seems to be doing well."

Despite nationwide recognition, Cuomo declined to take part in presidential races of 1988 and 1992.

Cuomo is survived by his wife Matilda, five children and 14 grandchildren.