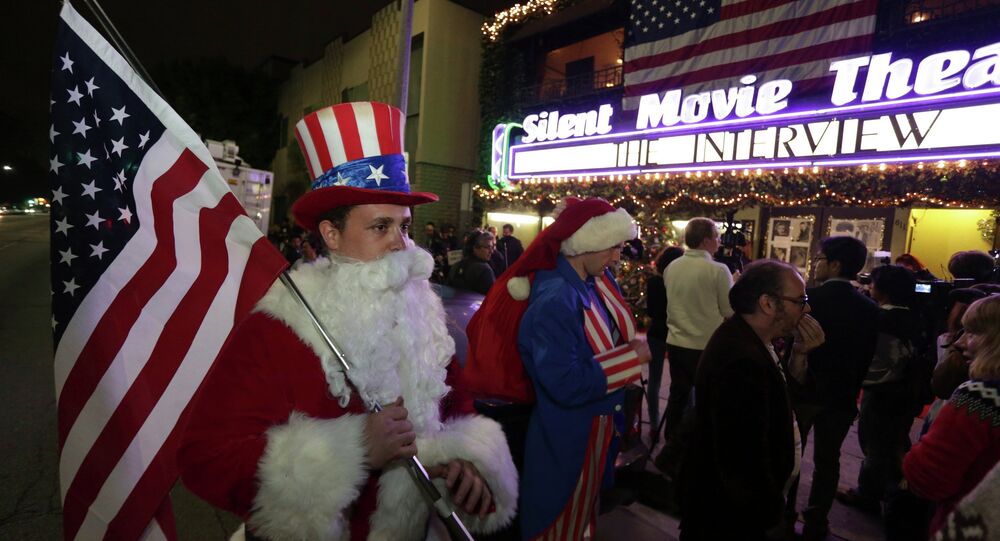 'The Interview' Sparks Patriotism, Rounds Up $18 Million on Opening Weekend

Sony's 'The Interview' has earned a combined total of nearly $18 million in its opening weekend, a sense of resistance to censorship appearing to drive many viewers' decision to see the film.

MOSCOW, December 29 (Sputnik) — Sony Pictures' scandal-plagued film "The Interview" made $2.8 million in theaters during its opening weekend, plus another $15 million via online sales, for a combined total of nearly $18 million, Reuters reports.

Opening across 331 independent theaters throughout the United States, the film, a comedy about the assassination of North Korean leader Kim Jong-Un, has also been rented or purchased over two million times between its release day, December 25, and late Saturday, making it Sony's most successful online movie of all time.

Box office analyst Jeff Bock from Exhibitor Relations told Reuters that the figure "is almost what it was going to do theatrically before it was pulled. It made about what people expected, but in a completely different way." According to Boxoffice.com, the $80 million picture was expected to gross about $20 million during its opening weekend before Sony made the decision to pull it.

Online viewers were willing to shell out $5.99 for an on-demand rental and $14.99 to purchase the movie from YouTube Movies, Google Play and Microsoft's Xbox Video. Apple has announced that iTunes will soon be carrying the movie as well.

© AP Photo / hn Young-joon
One Month Anniversary of Sony-N Korea Hacking Scandal: How It All Unfolded
Along with peoples' curiosity over the ruckus caused by the film, which has gone all the way to the UN Security Council, many are said to have decided to support the movie in the name of free speech, CBS News explained.

"I just wanted to support freedom of speech, you know –being able to watch a movie in America is one of the things that we enjoy," one fan was reported to have said. "No other country should tell us what to do, that's it," said another, according to CBS.

On the film review site Rotten Tomatoes, 64 reviewers gave the movie an average "fresh" rating of 52 percent; patriotism definitely seemed to be the driving force among some critics. Peter Travers of Rolling Stone magazine noted that while the film is "stupid" and "in bad taste," actor Seth Rogen's "instinct to try anything for giggles and sticking it to dictatorial [expletive] is worth fighting for. Screw Kim if he can't take a joke."

Intentionally or not, the film has also become a test case for simultaneously releasing movies in theaters and online. Bock explained that "it'll be interesting to see how quickly [the] industry moves forward with these kinds of services. This is money that they don't need to share with the movie chains and that's a big deal. It could shake a lot of things up."

© East News / KATSUMI KASAHARA
North Korea Not Responsible for Sony Pictures Hacking: US Cyber Experts
Meanwhile, experts have noted over the weekend that there's a high probability that North Korea was not responsible for the hacking of Sony Pictures after all, and that the country is probably not even technically capable of such a technically sophisticated operation.
...
Reddit
Google+
Blogger
Pinterest
StumbleUpon
Telegram
WhatsApp
36
Topic:
Sony's 'The Interview' and Scandal Behind It (59)