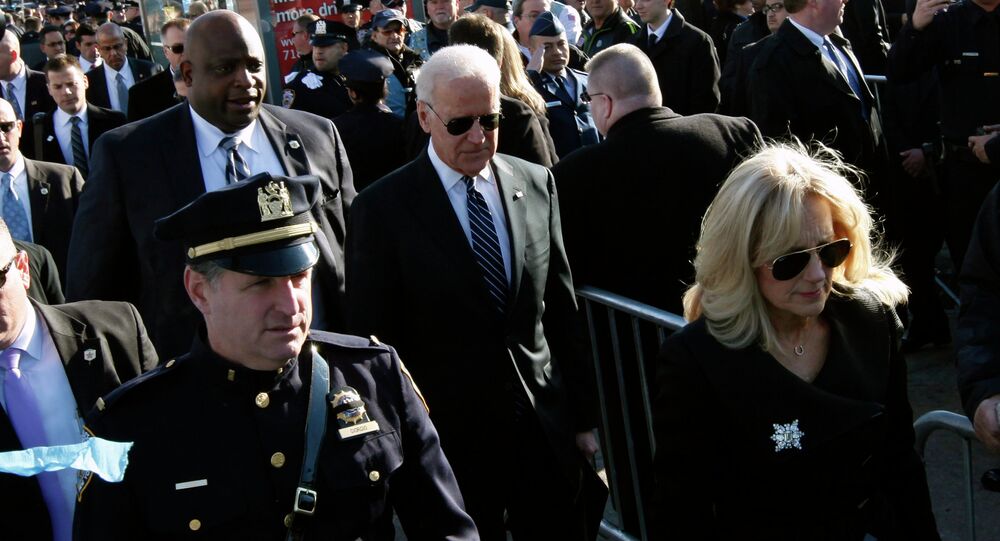 US Vice President Joe Biden delivered a speech at the funeral of Rafael Ramos, one of the NYPD officers who was fatally shot, along his partner, on December 20. Biden said Ramos "was the cop for all the right reasons."

"Our hearts are heavy today as we lay to rest one of our Finest, Police Officer Ramos. We will never forget," tweeted William J. Bratton, the NYPD commissioner.

Our hearts are heavy today as we lay to rest one of our Finest, Police Officer Ramos. We will never forget. pic.twitter.com/avKWp5BJtR

Rafael Ramos is succeeded by wife Maritza and his two sons, Justin and Jayden.

"Justin and Jaden, you showed tremendous courage and character in the past few days. You are your father’s sons," Biden said, adding that "he will be part of your life the entirety of your life."

© Fotobank.ru/Getty Images
Thousands Attend Wake of Killed NYPD Officer Ramos
"There are no words that I can offer to ease that profound sense of loneliness," Biden told Maritza. "But the time will come when Rafael’s memory will bring a smile to your face before it brings a tear to your eyes," he added.

“When an assassin’s bullet targeted two officers, it targeted this city and it touched the soul of the entire nation… Police officers, police families are a different breed. Thank God for them,” Biden said.

On Friday, thousands gathered to pay their respects at the eight-hour wake held for Rafael Ramos. New York Governor Andrew Cuomo, Bill de Blasio, the current mayor of New York, and Rudolph W. Giuliani, the former mayor of the city, along with hundreds of uniformed officers took part in the event.
Ramos and Wenjian Liu were killed by Ismaaiyl Brinsley in Brooklyn while they were sitting in their patrol car. The gunman later committed suicide. Brinsley allegedly attacked them to avenge Michael Brown and Eric Garner, who were killed by white police officers. He had a history of mental instability, according to NYPD.