On Tuesday, a woman donned a “Catholic Warrior” t-shirt and proceeded to damage a holiday installation at the Florida Capitol. “Sorry, but I have to take this down,” she said, ripping an angel figurine away from the flames of the Satanic Temple’s Christmas display.

The display depicted an angel falling from Heaven into the flames of Hell, and stood next to a traditional nativity scene. Susan Hemeryck, 54, told an officer that she “could not take it anymore” and tried to rip the display apart. She now faces a charge of criminal mischief.

The display had been denied the previous year as “grossly offensive,” but was approved this year following legal threats from the Americans United for Separation of Church and State, on the grounds that state property should allow displays from any religious group. 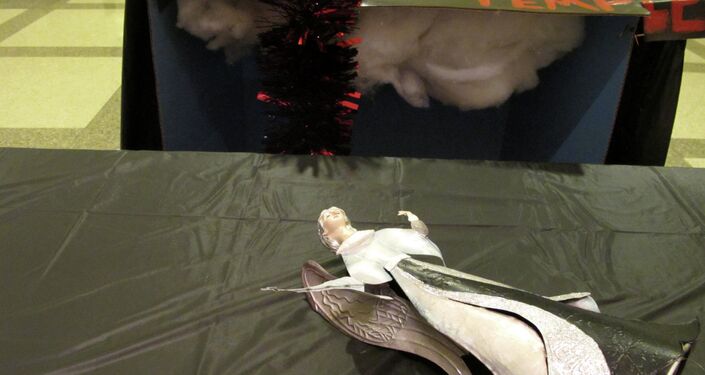 The Florida Capitol also featured an 8-foot-tall “Festivus pole” made of Pabst Blue Ribbon cans, and a display erected by the Church of the Flying Spaghetti Monster.

But it was the Satanic Temple display that sent Hemeryck over the edge.

“I just yanked that little devil off the fishing line,” she said. “I should have just done a better job and finished it off for good."

John Porgal, the Florida director of American Atheists, called this “a sign of what the religious right’s idea of tolerance is.” He plans to keep the display in its damaged condition.

Pam Olsen is an organizer for the nativity scene. Torn between her own Christian ideals and her belief in free speech, Olsen ultimately comes down against the vandalism.

“I do not like the display. I think it’s rude and it’s sad that he put it up to protest the nativity that means so much to millions of people,” she said. “However, I don’t think anyone should ever vandalize anything. Free speech is free speech whether we like it or not.”

Hemeryck had no previous criminal record.