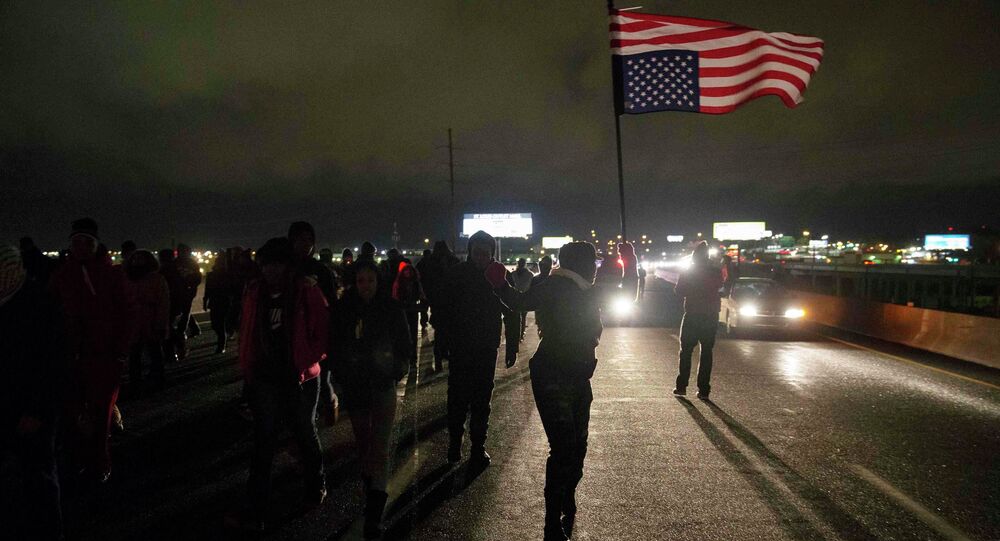 A new wave of protests in the US is arising from the recent killing of another African-American by a white police officer.

One of the protesters was seen holding an American flag upside down, what is officially recognized as a sign of discontent and despair. “The flag should never be displayed with the union down, except as a signal of dire distress in instances of extreme danger to life or property,” as stated by the US Code.

A wave of mass demonstrations across the US arose from grand jury decisions in New York and Ferguson not to bring charges against white police officers responsible for the deaths of two black men — Eric Garner and Michael Brown.

© East News / AP
St Louis Police Investigating Evidence of Black Teen’s Fatal Shooting: Spokesperson
The case of Antonio Martin has sparked renewed protest demonstrations across the country. However, this case is markedly different from the other two. After the latest event, three videos, depicting the incident between the 18-year old and the police officer, have been released by St. Louis County Police Department on Wednesday. In one of the videos, the suspect raises his hand, with what appears to be a weapon in his hand. The police officer then pulls his weapon, while backing away rapidly and fired three times. One of the bullets hit the suspect and killed him.

Jon Belmar, the St. Louis County police chief, said Martin pulled a gun and pointed it at a police officer. "Fearing for his life, the Berkeley Officer fired several shots, striking the subject, fatally wounding him," the police department said in a statement.

The protesters in US no longer need evidence to rule the killing of a black teen as unjustified, simply being black, while the officer is white is enough now to provoke the outrage of hundreds of misinformed people across the country.

In all of these cases, Justice is truly not what is desired, rather this is a personal backlash against a supposed racist pillar of authority, which they believe is one of the causes for their own poor situation. Hopefully the evidence in this case will exonerate the brave officer who defended himself against this armed individual.