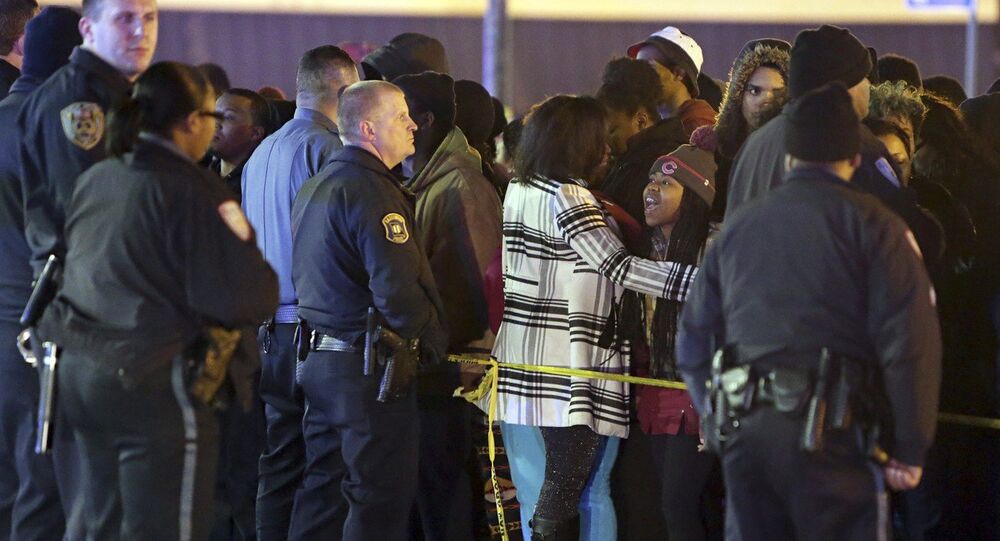 The St. Louis County Police Department published three videos showing three different angles of a fatal shooting of an African-American teenager by a white police officer several miles away from Ferguson. The incident sparked minor clashes between protesters and police.

The first video shows the deceased, identified as Antonio Martin, walking outside a Mobile gas station at approximately 11 p.m. local time (5 a.m. GMT) when a police car drove into the parking lot. Martin and an unidentified individual can be seen approaching the officers and talking to them for a minute. The footage freezes moments before the fatal shooting.

Martin appears to raise his arm. However, the video is too blurry to determine whether the 18-year-old was holding a gun. Jon Belmar, the St. Louis County police chief, said Martin pulled a gun and pointed it at a police officer. "Fearing for his life, the Berkeley Officer fired several shots, striking the subject, fatally wounding him," the police department said in a statement.

The footage is the only one that shows the incident and all parties involved in it. Two other videos released several hours later show the incident from different angles. The person accompanying Martin can be seen fleeing the scene in the second video.

The third video shows the police officer firing shots. In this footage Antonio Martin "has been left out of frame out of respect for his grieving family," the police department said in a statement. There are 31 cameras in the vicinity of the incident. However, only three of them captured what happened.

The name of the police officer involved in the shooting has not been released. Authorities only said that the 34-years-old officer has worked with the department for six years. "He will carry the weight of this for the rest of his life, certainly for the rest of his career," Belmar said, as quoted by the Associated Press, adding that "[t]here are no winners here."

Martin did not fire the weapon. "I don't know why the guy didn't get a shot off, whether his gun jammed or he couldn't get the safety off," said Brian Millikan, an attorney representing the police officer, as quoted by the AP.

© AP Photo / Jeff Roberson
Police Issue Official Statement of Antonio Martin Killing, Say He Was Armed and Dangerous
The police officer was on a routine check responding to reports of a theft. The St. Louis County Police Department is investigating the incident.

The shooting is the latest in a string of incidents, involving white police officers killing African-Americans.

In August, Darren Wilson, a white police officer, fatally shot Michael Brown, an unarmed African-American teenager, in Ferguson, a suburb of St. Louis just a few miles from where Martin died. In November, a grand jury chose not to press criminal charges against Wilson sparking large-scale nationwide protests against police brutality and unfair sentencing in the United States.

© East News / AP
Fatal Shooting of Black Teen in St Louis Is Presented Wrongly: City Mayor
However, Theodore Hoskins, the mayor of Berkeley, stressed that the Berkley incident cannot be compared to Brown’s death. Although Berkley is a predominantly African-American community, many blacks serve on the local police force, he pointed out. "In a city that is 85% black, we have a majority black police department, so our experience is different. Our police officers are more sensitive, and it is because of the black and white relationship you get a better understanding," Hoskins said, as quoted by the Guardian.

Jay Nixon, the governor of Missouri, issued a short statement regarding the incident in the St. Louis suburb: "The events in Berkeley are a reminder that law enforcement officers have a difficult, and often dangerous, job in protecting themselves and law-abiding citizens."

The crowd has gathered back out near the Mobil. Still very tense. #Berkeley pic.twitter.com/XdZaJgiioD

Some protesters are said to have hurled bricks at police officers and three explosive devices were set off at the scene, Belmar said. Two officers sustained minor injuries, he added. Four protesters were detained on suspicion of assaulting officers, Belmar said, according to CNN.

A makeshift memorial has been created for Antonio Martin.

Makeshift vigil at the #Berkeley gas station where #AntionioMartin was fatally shot. pic.twitter.com/cWkIPtrfvM