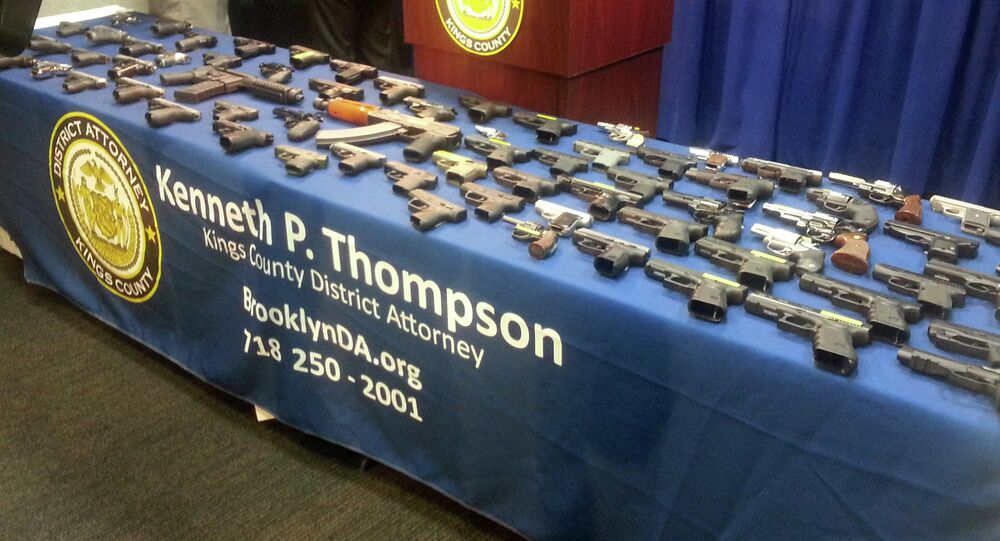 The recently uncovered gun smuggling scheme in the United States raises concerns of increased violence in the country amid recent shootings of police officers in New York.

MOSCOW, December 25 (Sputnik) — It was revealed on Tuesday that a former Delta airlines employee used the help of a current staff member to transport hundreds of firearms in carry-on bags from Atlanta to New York over the last several months.

"In this age of terrorism, it is simply unthinkable that anyone would breach the security of our nation's airports to smuggle guns and ammunition, including assault weapons, on commercial airliners and jeopardize countless lives all to make money," Brooklyn District Attorney Kenneth Thompson said in a statement, released Tuesday.

According to the statement, 153 guns were recovered during the investigation of up to 20 New York-bound flights. The guns could be part of a major flow of illegal firearms into New York, the city's Police Commissioner William Bratton warned in the district attorney's statement.

Thompson stressed at a press conference Tuesday that the smugglers "could have easily put a bomb" on the planes and that this is not just about gun violence, but is a terrorism threat.

"This investigation is deeply troubling because not only are these guns creating havoc on the streets of Brooklyn and throughout the country, but now this scheme poses a threat in terms of terrorism," Thompson said.

Mark Henry, who worked for Delta from 2007 to 2010, passed through airport security in Atlanta carrying an empty backpack. Henry's accomplice, Eugene Harvey, used his security clearance as current Delta Airlines ramp agent at the Atlanta international airport to hide guns in a secure place and handed them off to Henry before he boarded a plane. Thus, Henry would land in New York with a bag full of weapons.

Harvey and his three other co-conspirators in New York were finally arrested in December, after Henry's 17th trip. They were charged with nearly 600 counts of conspiracy, possession, transportation and illegal sale of firearms.

The uncovering of the gun smuggling scheme comes against the backdrop of two New York police officers recently shot and killed in New York.

Rafael Ramos and Wenjian Liu were killed in their patrol car in Brooklyn last Saturday by Ismaaiyl Abdullah Brinsley, an African-American with a long history of arrest and mental instability.

The shooting of the officers took place several weeks after a series of protests against police brutality erupted across the United States, in response to grand jury decisions not to indict the white police officers responsible for the deaths of African-Americans Michael Brown and Eric Garner.