An army of U.S. private contractors is back in Iraq, and their number will only increase in the coming months, a senior Obama administration official confirmed to Reuters.

Following in the footsteps of military servicemen deployed to the Middle East to assist local security forces in fighting ISIL, private security firms are back in the country that expelled them just a few years ago.

About 1800 contractors have been in Iraq since earlier this year, supporting US military personnel, securing diplomatic compounds and providing technical assistance. But the White House official, speaking on condition of anonymity, indicated this is only the beginning.

"It is certain that there will have to be some number of contractors brought in for additional support," he said.

The source didn't specify how many additional contractors will be deployed, but the number will depend on how widely dispersed U.S. troops advising Iraqi security forces are and how far they are from diplomatic facilities.

President Obama has already authorized almost doubling the number of troops in the country: there are currently some 1,750 servicemen there, and outgoing Pentagon chief Chuck Hagel ordered the deployment of an additional 1,300 troops last week.

© AP Photo / Mark Wilson
U.S. Secretary of Defense Chuck Hagel speaks to troops stationed at Baghdad International Airport earlier this month. Hagel, who flew to Baghdad to get a first-hand report on progress against the Islamic State militants, held a series of meetings with top Iraqi government officials and conferred with American military commanders. Al-Abadi told Hagel on Tuesday that his army is taking the offensive against the Islamic State group but needs more air power and heavy weaponry to prevail.

If the current ratio holds, this would mean the deployment of more than a thousand additional private contractors.

The bloodiest massacre was committed by Blackwater mercenaries who opened fire on Iraqi civilians in the capital’s Nisour Square, killing 17 and injuring 20.  The shooters were tried in U.S. federal court. One was convicted of murder while the other three of voluntary manslaughter.

The tragedy made Blackwater a household name, symbolizing unaccountability and lack of oversight from the government.  Iraq insisted on banning Blackwater from operating in the country.  Eventually public outrage forced its founder Erik Prince to change the name of the company, first to Xe Services, and then to Academi. Later he sold  the business. 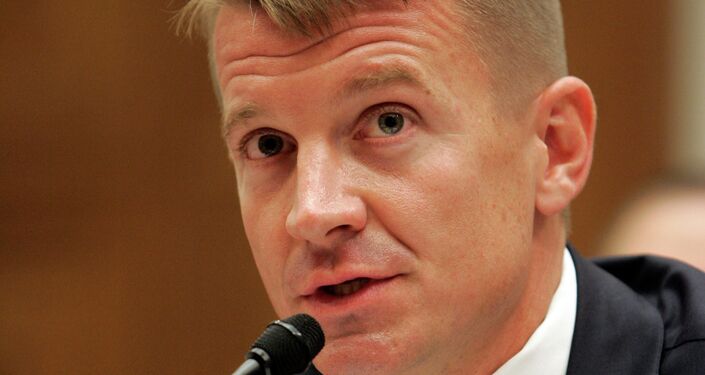 However, in September of this year, Prince went on the defensive, claiming that the organization could have successfully combated ISIL, allowing the U.S. to hold back its military in the offensive against militant strongholds in Iraq and Syria, if only the Obama administration had not “crushed” his old business.

“It’s a shame … because as a private organization, we could’ve solved the boots-on-the-ground issue, we could have had contracts from people that want to go there as contractors; you don’t have the argument of U.S. active duty going back in there,” Prince said during a discussion with retired four-star General James Conway.

“[They could have] gone in there and done it, and be done, and not have a long, protracted political mess that I predict will ensue.”

Prince’s words practically coincided with the surge in private mercenaries deployed to the region.  Thought it may be simple coincidence, it might mean that the U.S. government is considering them as the alternative to American soldiers going into battle with ISIL militants. Obama has on several occasions reiterated that he won't allow U.S. "boots on the ground," and technically private armies don’t qualify as such. So while Pentagon personnel may stay in their current training and advisory roles, U.S. security companies might send their contractors into direct fighting.