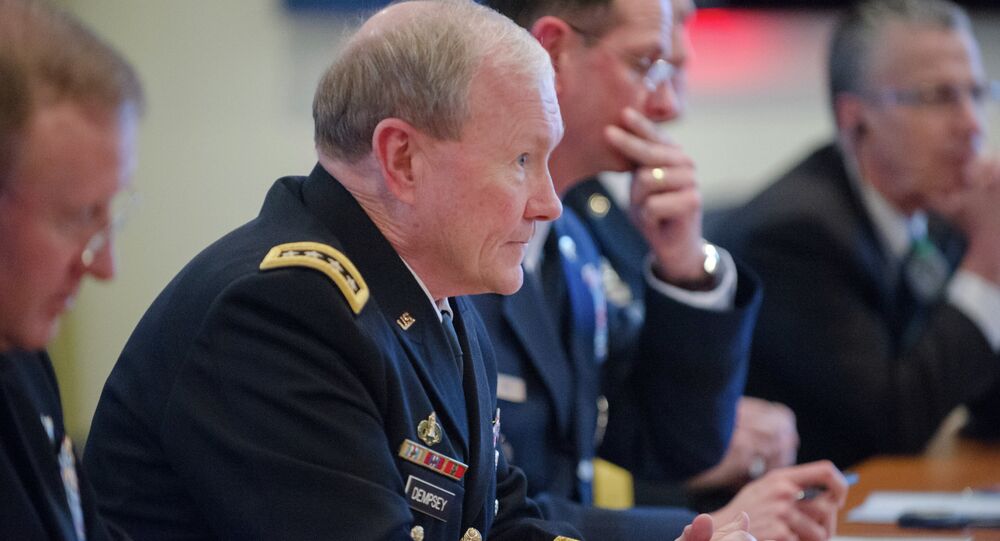 $585Bln Defense Budget Not Enough for US ‘Aspirations’: Chairman

Chairman of the US Joint Chiefs of Staff General said that the US budget allocations for defense must match the military and foreign policy goals of US lawmakers.

WASHINGTON, December 23 (Sputnik) — The US budget allocations for defense must match the military and foreign policy goals of US lawmakers, chairman of the US Joint Chiefs of Staff General Martin Dempsey said in a video address on Monday.

“We still need more certainty and flexibility in our budget and we have to match our resources with our aspirations,” Dempsey said in an end of the year statement to US troops, adding that “we can’t do more with less”.

Before commenting on the insufficient levels of funding for the US military, Dempsey praised the work of the US Congress in passing the 2015 National Defense Authorization Act and Defense Appropriations bill, which allocated $585 billion to the US Department of Defense (DOD).

The final budget allocation of over half a trillion dollars for one year of DOD operations was held back by US budget caps, known as sequestration. According to Dempsey, enforcing sequestration budgets will diminish US advantages over its adversaries.

Dempsey further stated that the lack of funding to the DOD remained a concern and that increased “support” was needed “to preserve military options for our nation”.

The US military budget has declined from its recent peak of nearly $700 billion in 2010, according to DOD data. In a global comparison, the United States spends more on defense than the next eight largest countries combined, including Russia, China, Saudi Arabia, France and the United Kingdom, according to figures from the Stockholm International Peace Research Institute.