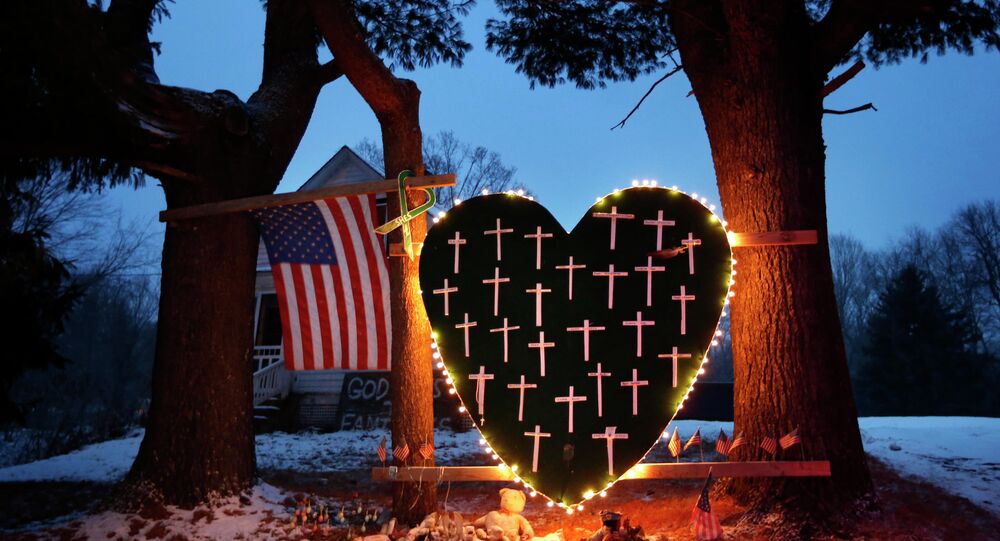 A group of families of Sandy Hook school shooting victims is seeking damages from the companies responsible for the sale to the assailant of his firearm, a rifle which they claim is only suitable for military purposes.

© AP Photo / Jessica Hill
Second Anniversary of US Sandy Hook Elementary School Shooting
MOSCOW, December 16 (Sputnik) – Families of the victims of the Sandy Hook Elementary School shooting in which 26 people were killed have filed a lawsuit against the suppliers of the firearm used by Adam Lanza in the massacre, arguing that the weapon was intended for the battlefield and should not be sold on the civilian market.

The Bushmaster AR-15 rifle "has little utility for legitimate civilian purposes. The rifle's size and overwhelming firepower, so well-adapted to the battlefield, are in fact liabilities in home defense. But there is one tragically predictable civilian activity in which the AR-15 reigns supreme: mass shootings," the lawsuit reads.

The civil action names manufacturer Bushmaster Firearms, firearms distributor Camfour and Riverview Gun Sales, the store where the rifle was bought in 2010, as defendants in the civil action suit for damages which was filed with the Superior Court in Bridgeport, Connecticut by the families of nine of those killed and an injured teacher.

© AP Photo / Greg Wahl-Stephens
Portland Police Arrest School Shooting Suspect
Bill Sherlach, whose wife Mary was killed in the shooting, told AP that although he believes the right to bear arms is guaranteed under the Second Amendment of the US Constitution, the gun industry needs to be held accountable for its business decisions: "These companies assume no responsibility for marketing and selling a product to the general population who are not trained to use it nor even understand the power of it."

The Hartford Courant reported last week that 11 families of those killed in the shooting had opened the estates of their deceased children; according to probate court records, this is a necessary legal step before a lawsuit can be made.

Another US School Shooting Victim Dies