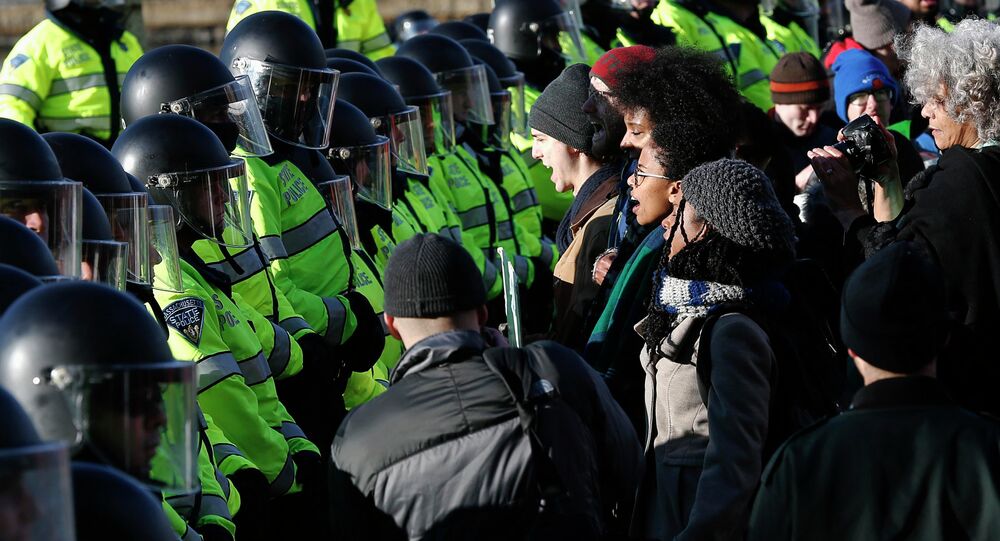 The mayor of Boston and the governor of Massachusetts are questioning the goal of anti-police brutality demonstrations that have been held in the city since late November.

© REUTERS / Brian Snyder
23 Arrested During Protests Against Police Brutality in Boston
MOSCOW, December 15 (Sputnik) – Authorities in Boston have announced that the cost of overtime pay for officers that have been policing demonstrations since late November against police brutality and the killings of unarmed black men in Missouri and New York City has reached almost $2 million, according to the Boston Herald.

“I’m certainly concerned about overtime costs,” Boston Mayor Martin J. Walsh told the paper, adding that in his opinion, "Some of the young people there are trying to entice police," and that the goal of the protests "really hasn’t been clear."

However, the Herald spoke to Rev. Jeffrey Brown of the 12th Baptist Church in the Boston neighborhood of Roxbury, who countered complaints about the financial cost of the protest. "I would caution those who start talking about the cost of things," he said. "If you reflect historically, during the civil rights movement, the issue around economic costs were used as a way to slow down the civil rights movement or to justify the upkeep of segregation… Change is rarely free.”

© REUTERS / Eduardo Munoz
Relatives of US Police Violence Victims Lead NYC Protest
The Boston Weekly Standard reported that Massachusetts Governor Deval Patrick complained in an interview with CNN on Saturday that the protests were intending to be disruptive rather than constructive. "We went to great lengths to try to connect with the organizers [of the protest]," Patrick, who is the country's only serving black governor, told CNN. "And they weren't interested in engagement because part of the point was to be disruptive."

According to the Herald's report, the mayor's office estimated overtime costs of manpower at $1.5 million for three protests, during which protestors marched around the city, stopping the movement of traffic. A spokesman for the state police also warned of their concerns of possible accidents or fatalities resulting from the interruption of traffic, adding that resources had been diverted from other areas to police the protests.