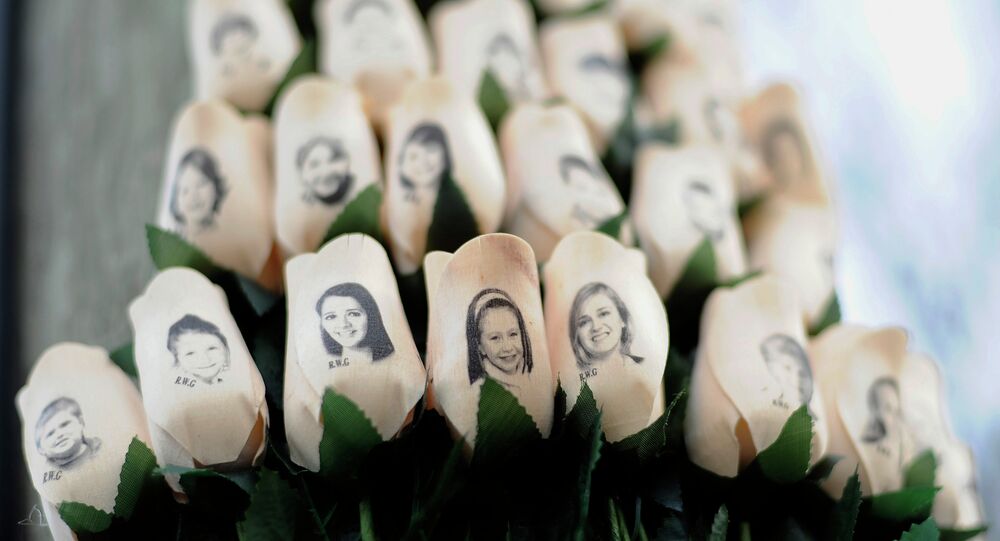 Relatives of the victims of America’s worst grade-school shooting are demanding justice from the firm that created the lethal weapon that murdered 20 children.

Some of the parents of the children who were killed in the massacre at Sandy Hook Elementary are set to sue Bushmaster, the company that made the AR-15 assault rifle used by gunman Adam Lanza to shoot dead 20 children and six adult staff at the school in December 2012.

The court documents state: “There is one tragically predictable civilian activity in which the AR-15 reigns supreme: mass shootings. Time and again, mentally-unstable individuals and criminals have acquired the AR-15 with ease and they have unleashed the rifle’s lethal power into our streets.”

© AP Photo / Jessica Hill, File
In this Jan. 28, 2013, file photo, firearms training unit Detective Barbara J. Mattson, of the Connecticut State Police, holds up a Bushmaster AR-15 rifle, the same make and model of gun used by Adam Lanza in the Sandy Hook School shooting, for a demonstration during a hearing of a legislative subcommittee reviewing gun laws, at the Legislative Office Building in Hartford, Connecticut.

The parents are working with Michael Koskoff, a lawyer who represented pop-star Michael Jackson’s family in a $1.5 billion wrongful death lawsuit. They’re also partnering with Karen Hinton, a Democratic party lobbyist who specializes in taking on major corporations and who has been described as a “public relations guru” by New York governor Andrew Cuomo

The Names of the Dead

The parents of at least 13 of the 20 children killed in the mass school shooting — the second-deadliest on record in the U.S. — have opened estates in their names at a probate court. This is the first step in filing a wrongful death lawsuit. Eleven of those parents have indicated they will proceed with litigation.

Sunday marked the two-year anniversary of the atrocity. It’s also the legal deadline to file a wrongful death lawsuit in civil court over the incident. There are some circumstances in which a lawsuit against a private company — like a gun manufacturer — could be filed within three years, but that statute deals primarily with product liability in this case.

© AP Photo / Pat Eaton-Robb
Nicole Hockley, whose 6-year-old Dylan died in the Sandy Hook Elementary School shootings in 2012, speaks at a news conference Monday, Dec. 15, 2014, in Hartford, Conn., marking the second anniversary of the shooting and calling for more legislation to curb gun violence.
The Hartford Courant reports there have been discussions with other lawyers about filing a lawsuit against the town of Sandy Hook over lax security at the elementary school where the shooting took place. Families of the victims are also considering suing the insurance company holding the policy for Nancy Lanza’s home. Her estate is the largest asset in the affair, having about $64,000 in value.

If they are assigned to the case, Koskoff and Hinton represent major-league talent for the victims’ families. Koskoff is a partner in Connecticut law firm Koskoff, Koskoff & Bieder. Three years ago they represented Michael Jackson’s family in an unsuccessful action against huge promotion firm AEG Live. They were slated to promote a tour Jackson was rehearsing for when he died suddenly in 2009.

Karen Hinton brings a similar level of high-octane clout. She worked for New York governor Andrew Cuomo when he was the housing secretary in the Clinton administration. She is married to Howard Glaser, one of Cuomo’s most-trusted aides. She says in her Twitter profile that she is “taking on big oil, big banks & other bullies”. She’s represented Ecuadorian villagers in a long-running dispute with oil giant Chevron.

The defendants in the lawsuit have yet to comment.