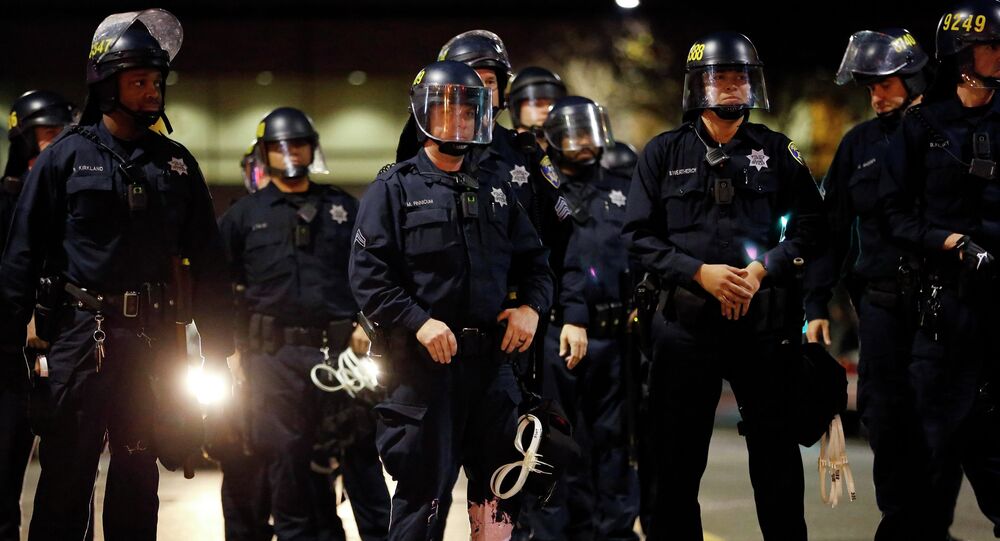 The US political establishment has offered a series of muted, politically calculated responses on the issue of systemic racism in American law enforcement amid protestors' calls for civil rights reform.

MOSCOW, December 14 (Sputnik) - With protests gripping US cities once again this weekend against the systemic racism said to be present in the American law enforcement system, much of the US political establishment has offered a muted, politically calculated response over the issue, or worse, no response at all.

President Barack Obama’s interview with the Black Entertainment Television network (BET) last week included a defense of US law enforcement as an institution, the president saying that "there are probably a lot of police officers who might have [seen the Garner video] and said ‘This is a tragedy, what happened, and we’ve got to figure out how to bring an end to these kinds of tragedies." Obama added that recent reforms to the justice system, including decreasing crime figures and declining incarceration rates, were "a testament to the ability to have good policing and good law enforcement, and be fair and smart."

Earlier this month Obama instructed the US Justice Department to set up a Task Force to make concrete proposals on the kinds of training reform and new equipment which might be needed to improve police interactions with minorities. So far the department has come up with the idea of equipping police officers with body cameras, along with changes to training methodology which would aim at ending racial profiling.

Obama told BET that what’s needed first and foremost today is a national conversation on race relations: "It used to be, folks would say, "Well, maybe blacks are exaggerating, maybe some of these situations aren't what they described. "What we've now seen on television, for everybody to see, gives us an opportunity, I think, to finally have the kind of conversation that's been a long time coming. "On the protests, which are now set to enter their third week, the president noted that "as long as they’re peaceful, I think they’re necessary."

New York City Mayor Bill de Blasio’s comments last week were similarly bland, the mayor echoing the president’s comments on George Stephanopoulos on ABC’s 'This Week' about the need for "an honest conversation in this country about a history of racism. "The mayor noted that the city needs "to retrain police forces in how to work with communities differently, "and that the body camera proposal would have an impact in promoting "transparency and accountability. "De Blasio was grilled by Stephanopoulos for skirting the question about whether or not he supported the Garner verdict, saying that he 'respects the process.'

Several top Democratic Party representatives in the House and Senate have stepped out in a show of public support for the issues raised by protestors, or even the protestors themselves, while many others, along with virtually all Republicans, stayed quiet on the issue.

Joined @TheRevAl & @NationalAction this AM at the #Justice4All March to meet w/families who have lost loved ones. pic.twitter.com/CG3Hcq2EYm

Today on the Capitol steps, congressional staff reminded us that #BlackLivesMatter. Proud to lend my support. pic.twitter.com/J5uuJgXNKj

Our justice system is plagued by police forces disconnected from the communities they serve. It's time for change. http://t.co/Ol8w5CG490

Death of #EricGarner was a tragedy & decision not to indict is an outrage. #BlackLivesMatter #TheSystemIsBroken pic.twitter.com/yMElSr8aql

Thanks to SI grand jury for doing justice & not yielding to outside pressure. Decision must be respected. Compassion for the Garner family.

An analysis of US congressional and gubernatorial tweets over the last couple weeks shows that among the big names in US politics, commentary on the problem of racism in the criminal justice system appears to be somewhat low on the list of priorities. Republicans such as House Speaker John Boehner, Senator Ted Cruz, and incoming Senate Majority Leader Mitch McConnell have focused their attention on Obama’s executive order on immigration, EPA regulations, Obamacare, and education reform;

Democrats, meanwhile, have focused their energy on the drive to sign people up for health care, the CIA torture report, the latest potential government shutdown, and the #BoehnerBankBailout.

I remind everyone that at 12:00 AM midnight tonight, the United States government runs out of money. Republicans objecting to a way forward.

Last week Democratic Representatives Elijah Cummings, John Conyers Jr. and Bennie Thompson of the Congressional Black Caucus sent a letter to House leaders asking for a series of hearings on the events which were said to "have fractured the trust of Americans in the integrity of the criminal justice system, "the Washington Post explained. The incoming Republican majority response to the proposals has been cold, Alaska Senator and Judiciary Committee member Jeff Sessions stating that that while "people ought to recognize there are legitimate concerns in the African-American Community, "he doesn’t "know if we need a hearing" on the issue, the Idaho Statesman quoted him as saying.

Meanwhile, prospective candidates for the 2016 presidential campaign have also been rather quiet on the issue, offering brief, measured, politically calculated responses over the systemic problems raised by the recent deaths of the unarmed black men, and the grand jury verdicts to them.

Republican New Jersey Governor and presidential hopeful Chris Christie noted simply that he would not question the decision of the grand jury, echoing Mayor de Blasio’s comments. Senator Rand Paul of Kentucky commented on the issue, but focused on high cigarette taxes in the state of New York instead of the race issue, noting that "for someone to die over…[cigarette taxation laws] – there is really no excuse for it."

Current Democratic Party presidential favorite Hillary Clinton offered the bland, calculated comment that "we have allowed our criminal justice system to get out of balance," adding that "I personally hope that these tragedies give us the opportunity to come together as a nation to find our balance again," the Associated Press quoted her as saying.

Journal of Race, Ethnicity and Politics editor and University of California political science Professor Karthick Ramakrishnan explained the calm, measured approach of politicians by noting that "both parties are reluctant to bring up race in any explicit way unless they are forced to." He added that in today’s circumstances, with US public opinion divided on the issue of race relations, bringing it up is more of a risk than a reward politically, AP explained.