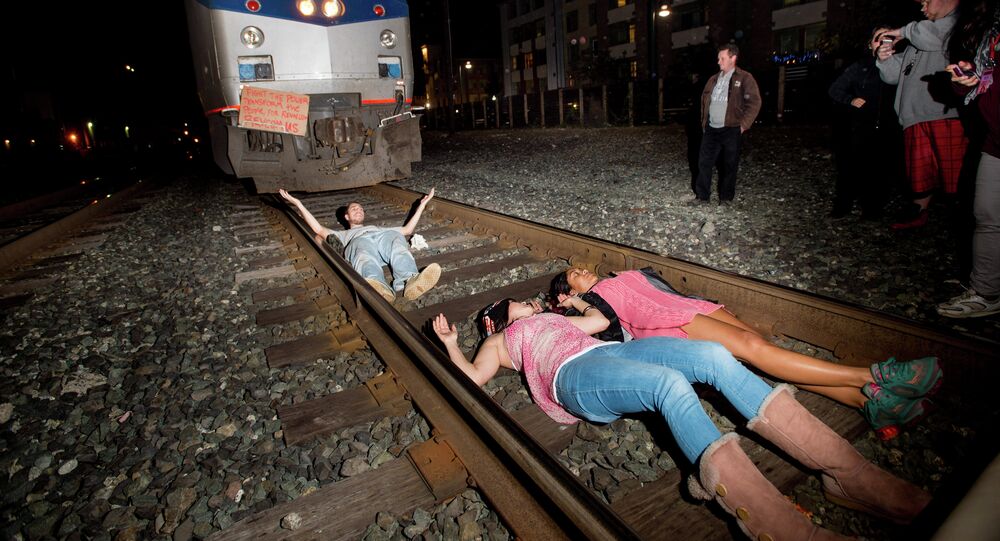 Hundreds of people who took to the streets of Berkeley in solidarity with rallies across the US were startled to discover a bizarre anonymously-created art installation on Saturday: cardboard photos of black people who had been lynched more than a century ago, which were hanging by nooses on the campus of the University of California, Berkeley.

MOSCOW, December 14 (Sputnik) – Three effigies of black people were found hanging by nooses on the campus of UC Berkeley on Saturday, according to the Daily News website.

The cardboard cutouts were found as protesters marched through the city in solidarity with other demonstrations that occurred across the country.

Two of the photo effigies had “I can’t breathe” signs attached to them. Those were Eric Garner’s last words as NYPD Officer Daniel Pantaleo choked him to death.

The third installation has disappeared but was reported in the social media.

“We’re uncertain of the intention of this. It could be related to the protests, but it could be racially motivated,” the Daily News quotes Claire Holmes, a University PR official, as saying. “We’d like to get to the bottom of it.”

© Photo : Taken from Michael McBride Twitter
Three effigies of black people were found hanging by nooses on the campus of UC Berkeley on Saturday, according to the Daily News website.

One of the cutouts was discovered hanging from a tree. It appeared to be that of Laura Nelson, a black woman who was lynched alongside her 18-year-old son, Lawrence, near Muskogee, Oklahoma, in 1911.

© Photo : Wikipedia / George H. Farnum
The lynching of Laura and Lawrence Nelson on 25 May 1911 in Okemah, Oklahoma

Their bodies, the website says, quoting century-old wire reports, were discovered hanging from a bridge some ten meters away from their jail cell after a mob broke in, gagged its jailer and kidnapped the Nelsons.

Another effigy was found tied to Sather Gate and appears to depict George Meadows, a 22-year-old black man who proclaimed his innocence after being accused of murder and rape in Alabama.

A crowd of about 500 men then took Meadows from the jail to Pratt Mines near Birmingham, where they “suspended him from a limb” and “riddled” his body with bullets, the website says, quoting an 1889 report by Birmingham’s Weekly Herald.

Neither officials nor students are aware of the identity of the anonymous artist.

The photos of the effigies appeared in social media, but Claire Holmes claimed they were taken during a prior incident during an unspecified Halloween.