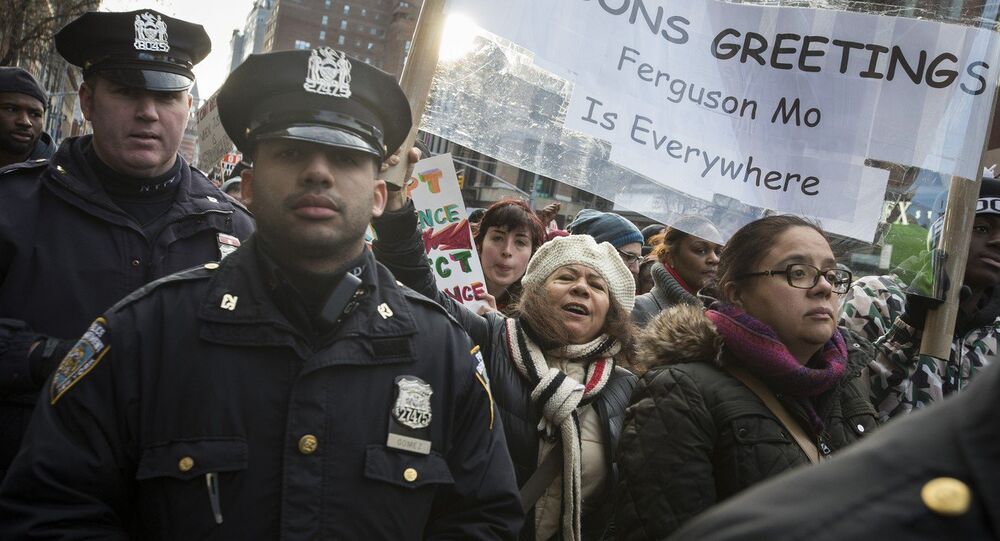 A New York-based attorney for Lambda Legal, an organization that seeks equality of law for all American citizens stated that local bills, reducing racial profiling within US law enforcement and controlling violent police actions are not enough in solving the existing problems.

"There's a bill before the city council that would be a start, but not enough, requiring police officers to identify themselves before they interrogate you," Humphrey, a New York-based attorney for Lambda Legal, an organization that seeks equality of law for all American citizens, said Saturday.

"We need structural change and hopefully this movement can be a catalyst to change policies," Humphrey, who was taking part in the Saturday "Day of Anger" protest in New York City, which follows recent grand jury decisions not to indict two white police officers responsible for the deaths of African-Americans Eric Garner and Michael Brown, stressed.

© REUTERS / Eduardo Munoz
Relatives of US Police Violence Victims Lead NYC Protest
According to Humphrey, from the legal standpoint, the police "didn't even have to touch Garner".

"They could have simply written a summons or a ticket. It was totally unjustified to tackle him — they don't go after white collar criminals in that way," the attorney stressed.

Garner, who was a street peddler, selling untaxed cigarettes, died from suffocation in July, when New York police officer Daniel Pantaleo took him in a chokehold. About a month later, on August 9, officer Darren Wilson shot and killed 18-year-old Brown in Ferguson, Missouri.

© AP Photo / John Minchillo
NY Protests Against US Police Violence Free of Arrests: Spokesman
Humphrey recalled another race-related police brutality incident that happened in 1991, when African-American Rodney King was beat up by four police officers in Los Angeles, who were later acquitted of assault. There were no African-Americans in the jury and King's case led to massive riots in Los Angeles.

"After the Rodney King incident, Congress passed legislation to allow the federal government to investigate similar cases of police brutality," Humphrey recalled adding that "brutality targeted against communities of color should be handled by the justice department".

US President Barack Obama has asked Congress to allocate $263 million to train and equip US police officers with body cameras in an effort to limit violent police conduct in the country.