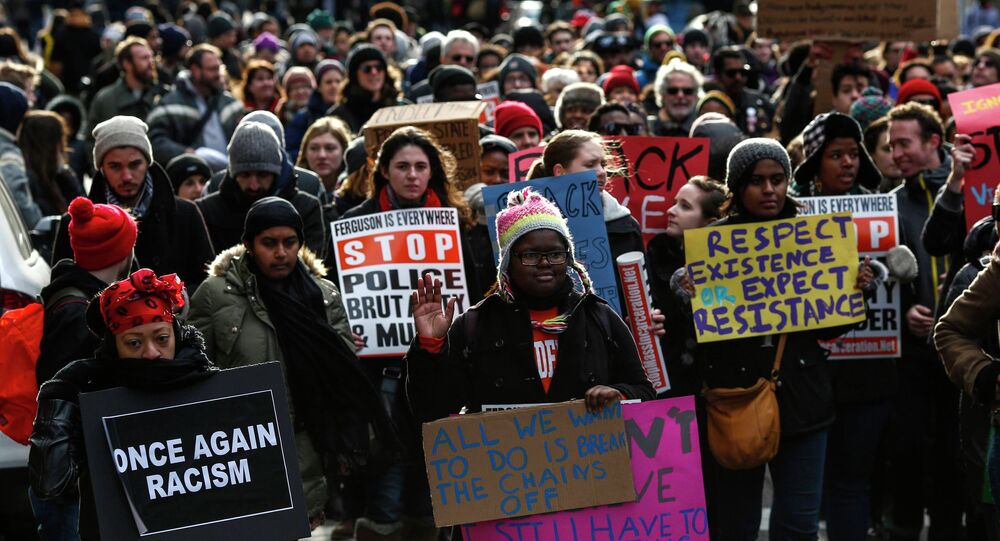 Protest organizers say that tens of thousands of people have braved chilly New York temperatures for demonstrations against racism and excessive violence in the US police force.

"We want full employment for our people. And we want an immediate end to police brutality. We need to look at how these police officers are being trained, how they approach situations, so they don't just reach for the guns, Taser people or choke them," organizer Umaara Elliott, 19, told Sputnik Saturday.

Earlier, a New York police spokesman told Sputnik that there had been no arrests or reports of violence during Saturday's NYC protests.

"The protest is powerful. People are marching, screaming and dancing. This is the uprising," 18-year-old protester Wilglory Tanjong told Sputnik.

The demonstrations are being staged in protest against racism within the US law enforcement and organizers are demanding an end to racial profiling by police.

The protests are the latest in a series of nation-wide rallies held in the United States over the Garner and Brown cases.

Let's not forget. Women of color are also killed by cops. For their memory, too, #ShutItDown. #MillionsMarchNYC pic.twitter.com/sRnsqg4zX5

Garner, 43, an overweight street peddler selling untaxed cigarettes, died from suffocation when he was held in a chokehold by police officer Daniel Pantaleo in New York on July 19. Brown, 18, was shot and killed by lawman Darren Wilson in Ferguson, Missouri, on August 9.

Grand juries in Missouri and New York have decided not to indict the officers, which led to massive and oftentimes violent protests in the country. US Attorney General Eric Holder held a series of roundtable meetings on community trust across the United States as part of a US government response to the demonstrations.