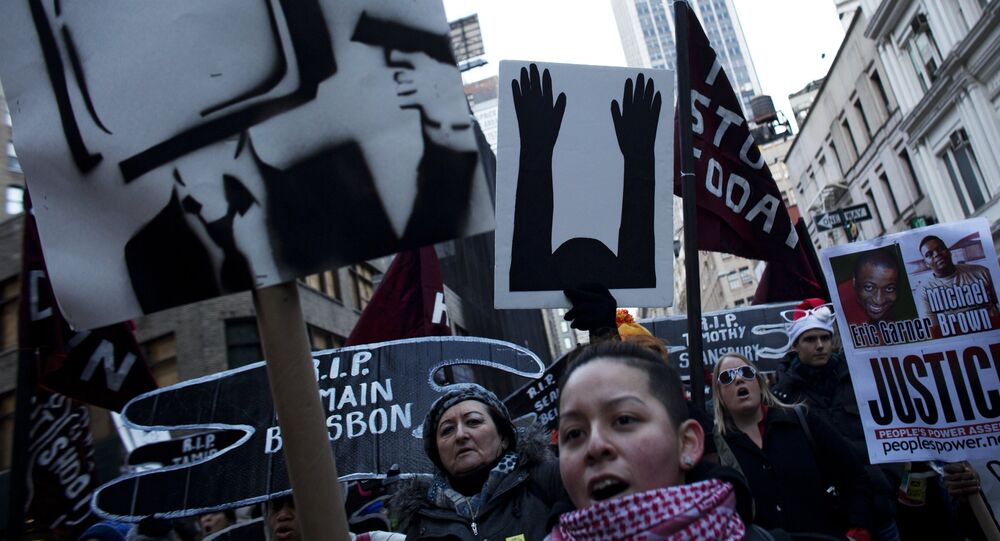 Thousands of protesters have gathered at the Freedom Plaza in Washington, DC, to protest against police brutality, injustice, and racial protesting.

«We are expecting five to 10 thousand people to participate," Rev. Angelique Walker-Smith, one of the organizers from National African American Church Engagement, told Sputnik on Saturday.

People are still coming in groups, families and by themselves. They are wearing T-shirts and carrying banners with slogans like «Hands Up! Don’t Shoot!», «Black Lives Matter», «I Can’t Breathe», «A Tear for Justice», «No Justice, No Peace», along with American flags. Those who do not have banners can make them in numerous spots, as well as purchase flags and T-shirts.

The representatives of different human rights organizations are giving speeches from the podium in the middle of the square.

Although the protest is massive, it is peaceful. Only a few police cars and police officers can be spotted here and there.

Many live trucks and media are covering the event, which is one of the series of rallies held across the country, including New York.

Walker-Smith said they had reached out to people through social media, grass root networks, coalitions and partnerships.

She added that the protest will march to the Capitol building at noon where there will be a national program with speakers, including politicians, church leaders, and grass roots leaders.

Many have brought their children. A young lady, who wanted to be called Mimi, DC resident, said she came to show that everyone has to be treated equally.
«People who break the law regardless whether they are police or an average citizen should be held accountable," Mimi told Sputnik, adding that she brought two of her kids to have them engaged as citizens. «They should know that they live in the country where they are free to voice their opinion, including approval or disapproval of the government."

The size of the D.C. march is already in the thousands http://t.co/pTZKJHgjRO #justice4all pic.twitter.com/MwsMhfOpAq

Elizabeth Lindsay, a DC resident and one of the rally participants, said she came because she is very upset with all of the violence against the black people in the United States.

The recent killings of unarmed African Americans Eric Garner, 43, and Michael Brown, 18, by white police officers that have not been indicted have triggered a public outcry and protests over police practices and racial inequality in the United States. Demonstrators in many US cities have already marched in large protests, shutting down highways and chanting anti-discrimination slogans.