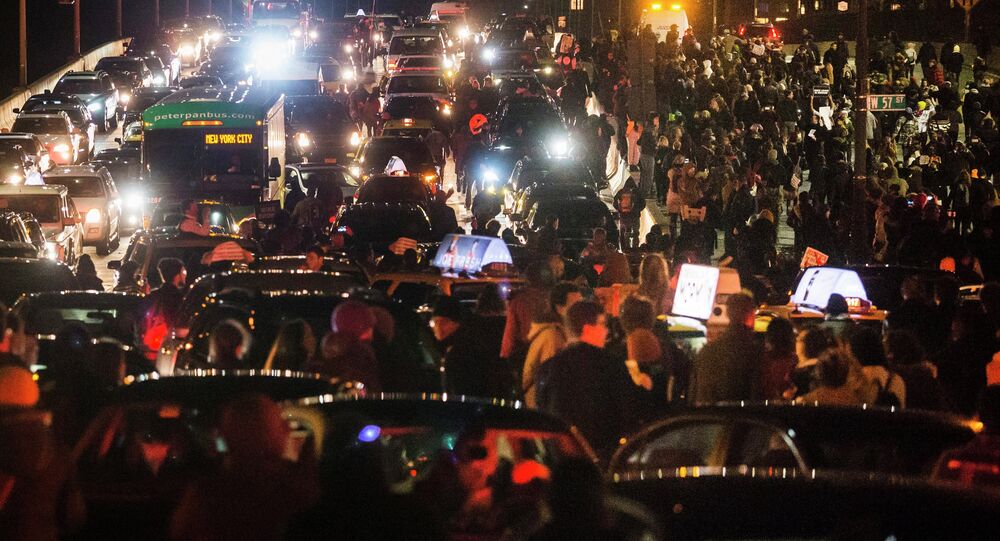 The event, dubbed the “Day of Anger,” is set to begin Saturday in Manhattan, a New York City district that has seen weeks of demonstrations protesting a grand jury’s decision not to indict a law enforcer responsible for the death of Eric Garner, who died in July after having been put in a chokehold.

“We Demand Justice. For Mike Brown. For Eric Garner. For Akai Gurley. For All Those Killed By Racist Killer Cops,” the group said Friday in a Facebook post.

The event, dubbed the “Day of Anger,” is set to begin at 14:00 EST (19:00 GMT) in Washington Square Park, in Manhattan, a New York City district that has seen weeks of demonstrations protesting a grand jury’s decision not to indict a policeman responsible for the death of Eric Garner, a middle-aged black man who died in July after having been put in a chokehold.

© REUTERS / Jim Young
Anonymous Set to Stage Day of Anger, Calls for Millions March in NYC
This came after another grand jury in Ferguson cleared a white police officer of any wrongdoing in the death of Michael Brown, an unarmed black teenager who was shot down in August in Ferguson, St. Louis.

Most recently, another black person was gunned down by a white rookie police officer in New York City, as he was walking up the stairs in an apartment block. After hearing a rustling noise on the stairs, the police officer opened fire at 28-year-old Akai Gurley without warning.

The event has been hashtagged #BLACKLIVESMATTER, in a sign that the US society will no longer tolerate racially-related violence and racial profiling.

The killings re-energized a nationwide debate over police brutality and racism prompting calls for a US criminal justice system reform. Since then, multiple bills have been introduced by the US Senate dealing with civil rights issues like racial profiling. State governments in Georgia, California, Utah and Texas are also working on legislation to address inequalities in the criminal justice system.

Arrested Protesters in NYC Sang as They Boarded Police Bus