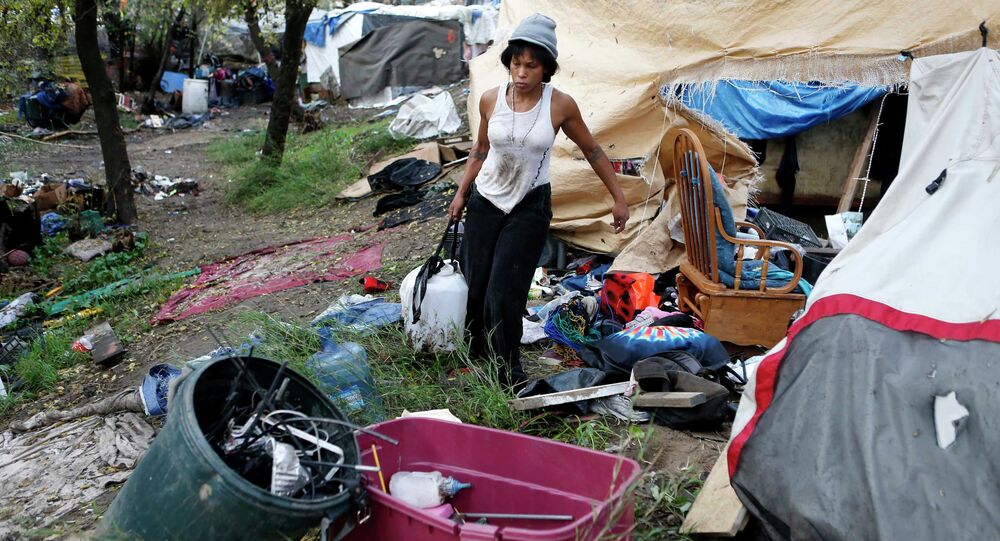 Economic Recession Creating Rise of Homelessness in US

Many homeless Americans have jobs, but are not able to keep up with high living expenses.

MOSCOW, December 11 (Sputnik) — The United States has the highest levels of homelessness among all industrialized countries, the National Coalition for the Homeless (NCH) said, according to France24.com.

The number of homeless people in the US is “historic”, NCH representative said, according to the newspaper. The economic recession has made the situation for families more complicated, with many of them being not able to make ends meet.

© Sputnik / Larisa Saenko
Number of Homeless Children in US Reaches All-Time High: Report
“People can work 40 hours a week at a full-time job, at minimum wage, and still be below the poverty line," stated member of NCH board, Yvonne Vissing. "Most homeless people do work but they cannot keep up with the costs of living. Housing affordability and accessibility is a major problem," she added.

The NCH is a network of activists, designed to provide support for homeless persons, according to its official website. Its mission is to prevent and reduce homelessness in the US and to ensure the rights of homeless people and their access to housing facilities.

Now, even as the figures show historic highs, the US Federal Reserve is intent on driving up asset prices even further through its QE programs. This action will only make the cost of living even higher and force more average people out onto the streets.

The US capital is one of the most troubled cities with regard to this issue. According to the 2014 report of MWCOG, nearly 12 000 people in the metropolitan Washington region were homeless, that is 3.5% more than in previous year.

Number of Homeless Children in US Reaches All-Time High: Report