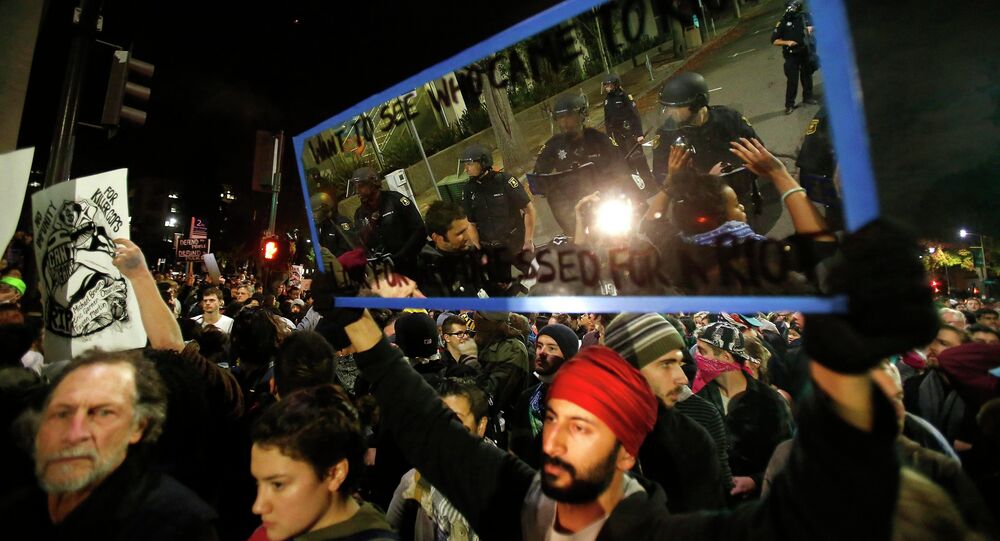 Controversy continues to surround the Ferguson case, causing protests across the US. And though the federal prosecutor released a slew of documents from the investigation of the killing of an unarmed black teenager by a white police officer, there is one crucial piece of evidence still missing.

Meanwhile, St. Louis County Prosecuting Attorney Bob McCulloch released thousands of documents from the grand jury proceedings of November 24, after that jury failed to indict police officer Darren Wilson in the death of Michael Brown. But one key interview – with Brown’s friend Dorian Johnson – has still not been made public.

Evidence released on Monday contains 53 audio recordings of police radio traffic, where a police dispatcher is reporting an incident saying “robbery in progress,” shortly before Michael Brown is shot. But Wilson's exchange with Brown had nothing to do with the potential robbery case.

Wilson reportedly warned Michael Brown and his friend, Dorian Johnson, not to walk in the middle of the street. Only later Wilson claimed that he realized that Brown fit the description of the suspect in the case, described by the dispatcher simply as “a black male in a white t-shirt.”

This radio exchange only adds confusion to the conflicting accounts of the deadly exchange between Wilson and Brown.

Other releases include a federal autopsy, which is no different from the previous autopsies performed by local officials and a private examiner hired by Brown's family. An audio file of the gunshots, some witness interviews, and the transcript of the announcement of Prosecuting Attorney Bob McCullough that Wilson would not be indicted were also released. Given all the information that's come out since November 24, one key witness interview is still missing: the FBI interview with Johnson, Brown's friend, and the only other person who was present at the scene of the crime.

During McCullough's statement on November 24 announcing the grand jury decision not to indict Darren Wilson, he stressed that the witness accounts contradicted each other at different times.

"Many witnesses to the shooting of Michael Brown made statements inconsistent with other statements they made," McCulloch said.

But while McCullough released some of the documents with the aim of appeasing protesters, saying "everyone will be able to examine that same evidence and come to their own conclusion,” with that same gesture the prosecutor handed the case into the hands of an angry public demanding justice in the case.

While Johnson has made public statements, his FBI interview remains to be released. And McCullough's statements of the contradicting witness accounts only add to the fury of the protesters across the nation.

Demonstrators angry over the recent killings by white police officers of unarmed black men, Michael Brown and Eric Garner have sparked violence during the three days of protesting in the California Bay Area. Berkeley and Oakland are historical landmarks where major US riots took place in the 1960s and the cities remain some of the most liberal places in the US. Hundreds of protesters have gathered in the Bay Area, blocking traffic on a major freeway and bringing an Amtrak train to a complete stop on Monday night. Over 200 hundred people have already been detained.

Although no new details have been revealed in the case of the deadly shooting of Michael Brown, protests still erupt across the nation, while questions remain open about the allegedly biased system of justice in the U.S., as well as about racial double standards held by law enforcement authorities.