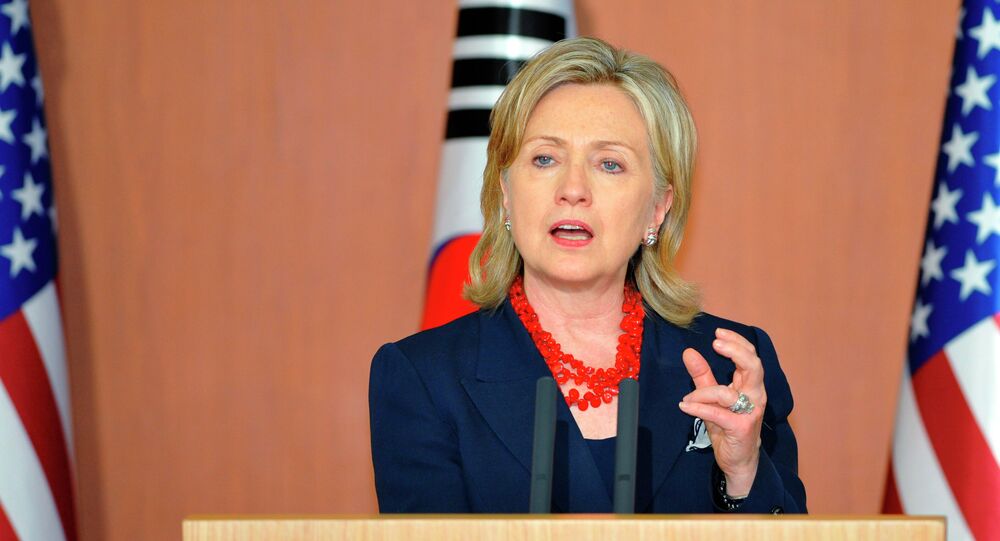 The WikiLeaks founder predicts that Google may play a crucial role in Hillary Clinton's upcoming presidential campaign. The director of Google Ideas Jared Cohen used to be Clinton's adviser and is likely to help his former chief, Julian Assange states.

"Google will be an important factor on the US elections of 2016," Assange said via video conference at a Madrid presentation of his new book "When Google met WikiLeaks". He added that Google will support Hillary Clinton as the company has close ties with the US Department of State, which Clinton previously headed.

According to Assange, Google's relations with the US government date back to 2002. He stated that many people who are currently working for Google are closely linked to US foreign policy. "It should be noted that the ties [of Google] with Hillary Clinton are especially strong. Many of those employed by Google have previously worked as her advisers or assistants," Assange said.

REUTERS John Stillwell/pool
Assange Claims Google Gets White House Support, Does Things CIA Cannot Do
The WikiLeaks founder also reminded the audience that Google took an active part in PRISM – a clandestine anti-terrorism mass electronic surveillance data mining program launched in 2007 by the US National Security Agency (NSA). "On the structural level, Google currently acts like the NSA, like a bait to lure as many users as it can and gather all the information about them – where they are, what they are searching for, what do they do in the networks. It creates "user profiles" and passed the information to US government," Assange said.

According to Assange, Google is currently the number one lobbyist in the United States, spending more money than any other company to influence the decisions of Congress.

"Google is stronger and more powerful than the [Catholic] Church," Assange concluded.

In his book "When Google met WikiLeaks," Assange tells about his meeting with Google's Eric Schmidt and Jared Cohen in June 2011. The executive chairman of Google Eric Schmidt and the director of Google Ideas Jared Cohen, who previously worked as an adviser to Hillary Clinton, visited Assange when he was living under house arrest in Norfolk, England.

© Sputnik / Aleksey Nikolskyi
Future Clinton Campaign Managers Call Themselves the Mafia
The Google senior employees were accompanied by the vice president of the US Council on Foreign Relations Lisa Shields and then-journalist and current Department of State adviser Scott Malcomson, to whom Assange refers as the "diplomatic emissaries of Washington."

According to the Australian whistleblower, when the conversation touched upon the accountability of WikiLeaks for publishing secret documents, including diplomatic correspondence, he realized it was not only Google that Schmidt was representing. "The delegation that visited me was one fourth Google and three fourths the US Department of Foreign Affairs," Assange said.

Assange published a full transcript of that meeting on the WikiLeaks website in 2013 and has also included it in the book.

Australian whistleblower Julian Assange launched the WikiLeaks website back in 2006, taking the role of editor-in-chief. WikiLeaks made its name by releasing scores of classified diplomatic and military documents from governments around the world, most notably the United States. Assange has been wanted for alleged sexual assault in Sweden since 2010. He has been staying in the Ecuadorean embassy in central London since 2012, facing detention and extradition to Sweden if he steps outside.

Assange Appears at US Conference Via Hologram