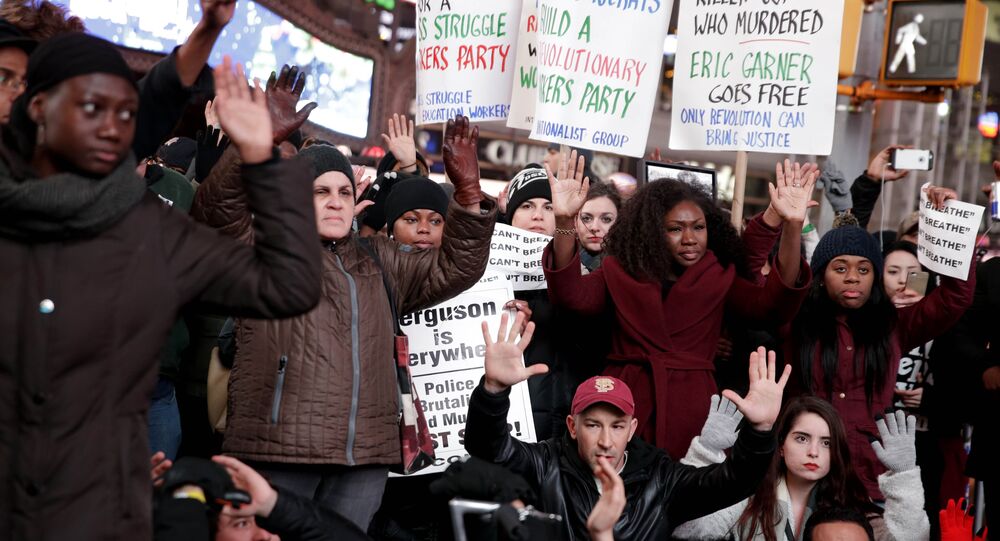 At least 40 people have been arrested in New York City after protests erupted over the controversial decision in Garner's chokehold case.

© REUTERS / Eric Thayer
Eric Garner Protests in NYC Lead to Over 30 Arrests
MOSCOW, December 4 (Sputnik) — Police are arresting protesters blocking streets in midtown Manhattan, in New York City, after a grand jury on Wednesday decided not to indict NYPD officers involved in the death of a black man, just days after a similar ruling in Ferguson, according to ABC News.

© REUTERS / Stephen Lam
US Civil Rights Leader Announces March in Washington Over Garner Ruling
At least 40 people have been arrested in New York City after protests erupted over the controversial decision in Garner's chokehold case.

The 43-year-old Garner died from suffocation in July after being put in a chokehold by white police officer Daniel Pantaleo. A bystander recorded a video of police restraining Garner, an asthma and heart disease patient, as he cried out repeatedly "I can't breathe!".

Crowds chanted "I can't breathe!" and "Hands Up – Don't Choke!" as they carried signs through Times Square, according to ABC News. Traffic was temporarily stalled in the Lincoln Tunnel and on the Brooklyn Bridge. A group of activists held a "die-in" protest at the Grand Central Terminal.

This follows a Ferguson grand jury's ruling last week that white officer Darren Wilson should not be charged with the shooting of a black teenager, Michael Brown, in August. The killing and the verdict set off nationwide protests and renewed debate over police brutality and racial profiling in the country.