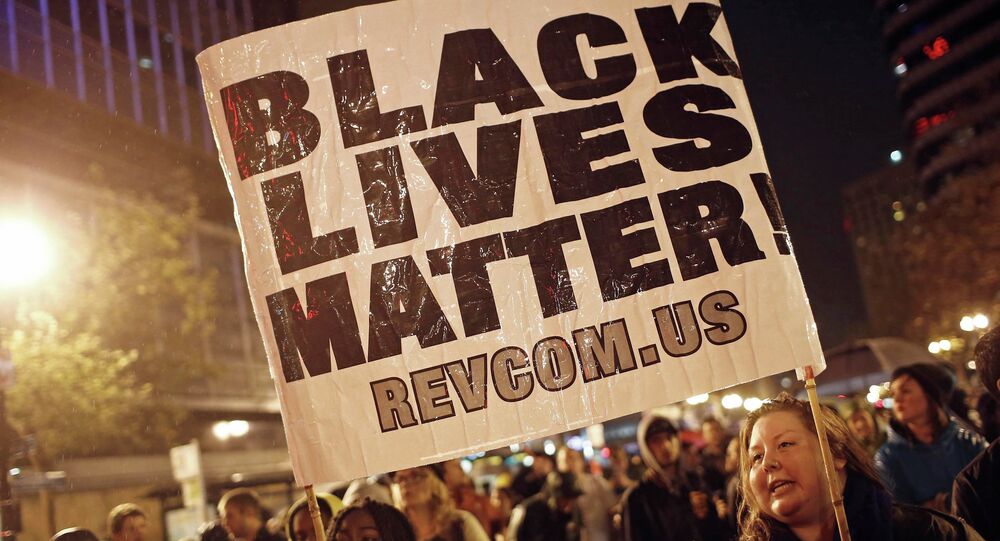 Thousands have taken to the streets of New York City after a grand jury decided not to press charges against a police officer who killed an unarmed African-American earlier this year. Wednesday's grand jury decision followed a similar ruling as in Ferguson, which sparked protests across the US.

Protesters have rallied in New York City's Times Square, Union Square, Lincoln Center and Staten Island, calling for a public trial of officer Pantaleo. They chanted, "I can't breathe!" and "No justice, no peace!" according to Fox News. A group of protesters had staged a “die-in” at Grand Central Station, representing victims of police brutality.

NYC: The Brooklyn Bridge has been shut down due to a large protest. #EricGarner pic.twitter.com/azHP2xZ5fC

Although demonstrators blocked traffic in some parts of the city, they did not disrupt the tree lighting ceremony at Rockefeller Center. However, over 30 protesters had been detained near Rockefeller Center "after demonstrators tried to jump and break down police barriers," NYPD spokesman Stephen Davis said, as quoted by The Wall Street Journal.

I can hear protesters chanting "no justice, no peace" from up here in 30 Rock. #ericgarner pic.twitter.com/8xpj01jHqK

#EricGarner protesters are defiant willing to be arrested laying down in front of a cop car pic.twitter.com/SEMmclzmGt

© REUTERS / Adrees Latif
US Attorney General Orders Federal Probe Into Garner Case
Garner, who was asthmatic, died from suffocation in July after being put in a chokehold by police officer Daniel Pantaleo. A bystander recorded a video of the police arresting Garner, who sold untaxed cigarettes, and of Pantaleo later choking the man to death, as Garner cried out "I can't breathe, I can't breathe." The video went viral online.

Wednesday's grand jury decision on Garner follows another similar case in Ferguson, Missouri, where African-American teenager Michael Brown was killed by a white police officer in August. That killing and a similar verdict by a grand jury not to indict officer Darren Wilson last week set off nationwide protests and renewed debates over police brutality.