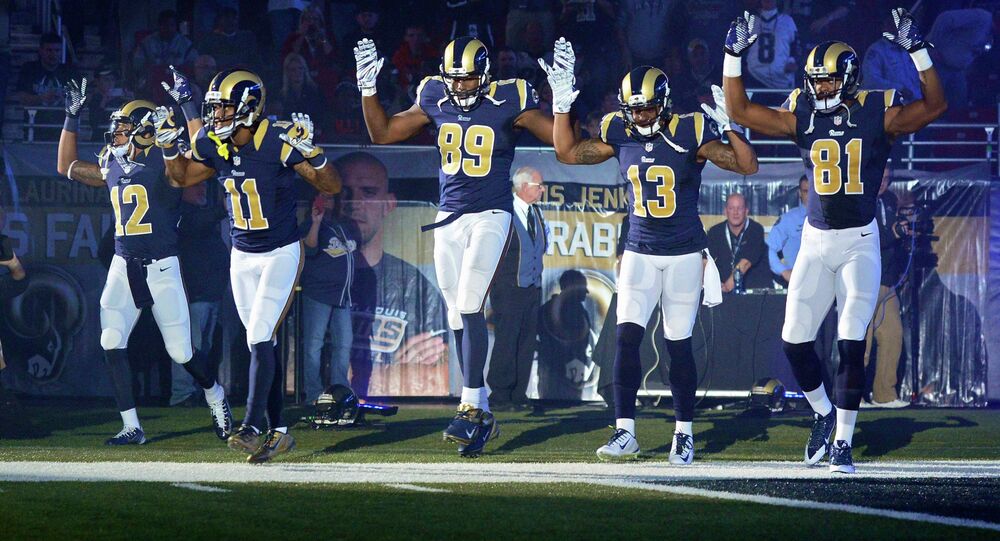 Five NFL players of the St. Louis Rams sparked controversy after they made the "hands up, don't shoot" gesture in a show of support for the people in Ferguson and other cities across the US, who were disappointed by the grand jury’s decision.

© REUTERS / Joshua Roberts
Ferguson Protesters Leading in Time’s Annual 'Person of the Year' Poll
MOSCOW, December 2 (Sputnik) – Five NFL players of the St. Louis Rams made the "hands up, don't shoot" gesture before a Sunday game against the Oakland Raiders in a show of support for nearby Ferguson and other cities across the US, where people have been protesting against the grand jury’s decision not to indict Darren Wilson in the death of Michael Brown.

The Rams players have been both praised and severely criticized for the gesture, which also sparked intense debate on social media.

Tavon Austin, Stedman Bailey, Kenny Britt, Jared Cook and Chris Givens were the ones who raised their hands during pregame introductions. Protesters frustrated over police brutality and unfair sentencing, disproportionately affecting ethnic and racial minorities in the US, have used the gesture since Wilson, a white police officer, killed Michael Brown in August. According to some claims, the African-American teenager raised his hands in a sign of surrender before he was fatally shot. Others say Brown charged at the officer instead.

"We haven't been able to go down to Ferguson to do anything because we have been busy. Secondly, it's kind of dangerous down there and none of us want to get caught up in anything,” Cook said after the game, as quoted by ABC News. "So we wanted to come out and show our respect to the protests and the people who have been doing a heck of a job around the world," he explained.

© REUTERS / Handout via Reuters
Officer Darren Wilson Resigns From Ferguson Police Force
"We just understand that it's a big tragedy, and we hope something positive comes out of it," Stedman Bailey added, as quoted by USA Today.

Mark Sappenfield praised Rams players for the gesture. In an opinion piece in the Christian Science Monitor he stated:  “The fact that five Rams took the one moment they could be sure that the stadium was watching to show their solidarity with Ferguson, then, is significant. Clearly, it was coordinated. Clearly, it was something that felt that they could not not do.”

The St. Louis Police Officers Association (SLPOA) said it was “profoundly disappointed” by the move, according to SLPOA statement. “[T]he members of the St. Louis Rams football team … chose to ignore the mountains of evidence released from the St. Louis County Grand Jury this week and engage in a display that police officers around the nation found tasteless, offensive and inflammatory,” the association added, urging NFL to discipline the players. However, Brian McCarthy, NFL spokesman, said the league will not discipline the players, according to CNN.

© REUTERS / Adrees Latif
UN Torture Watchdog Slams US For Police Brutality in Ferguson
"I know that there are those that will say that these players are simply exercising their First Amendment rights," said Jeff Roorda, the association's business manager and a representative in the Missouri legislature, as quoted by BBC. "Well I've got news for people who think that way. Cops have first amendment rights too, and we plan to exercise ours. I'd remind the NFL and their players that it is not the violent thugs burning down buildings that buy their advertiser's products. It's cops and the good people of St Louis and other NFL towns that do," he added.

The story sparked intense debate on social media, with one user saying "I'm sorry that police responded more quickly to NFL players' peaceful protest than they did to a dead body in the street."

I'm sorry that police responded more quickly to NFL players' peaceful protest than they did to a dead body in the street. #STLPDApologies

Some users noted that the show of support by the Rams players is reminiscent of the 1968 Summer Olympics in Mexico. Back then Tommie Smith and John Carlos, African-American athletes, made a black power salute during their medal ceremony in support of the civil rights movement.

This situation with the Rams players kinda reminds me of the 1968 Olympics pic.twitter.com/oB8SN2tgvY