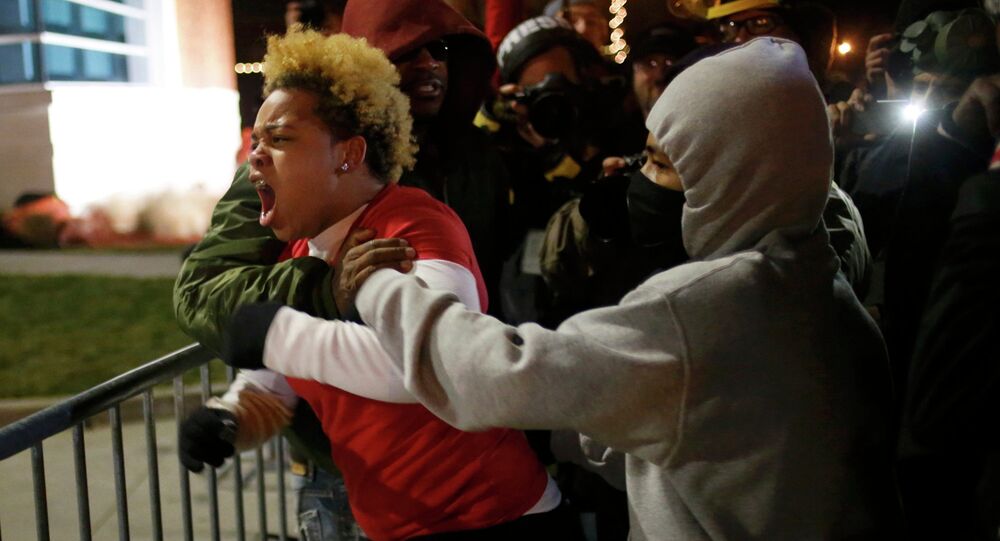 North Korea condemned on Friday the grand jury's decision not to indict a white police officer who fatally shot an unarmed African-American teenager in Ferguson and accused Washington of systematic human rights violations.

© REUTERS / Lucy Nicholson
LA Police Arrest Over 100 Protesters on Third Night of Ferguson Riots
MOSCOW, November 28 (Sputnik) — According to a spokesperson for the North Korean Foreign Ministry quoted by Korean Central News Agency (KCNA), the protests that erupted all over the United States following the grand jury's Monday decision, are "clear proof of the real picture of the US as a tundra of human rights, where extreme racial discrimination acts are openly practiced."
© Fotobank.ru/Getty Images / Scott Olson
Ferguson Protester Says Military Personnel Made ‘Trigger Signal’ at Him

"Such individual human rights abuses are taking place one after another and have reached a systematic and wide-ranging and extremely grave phase. The occurrence of nationwide protests at present goes to prove that the US human rights regime is beset with serious problems," the Foreign Ministry spokesman said, as quoted by KCNA.

On Monday, the Ferguson grand jury decided not to bring charges against white police officer Darren Wilson who shot dead the unarmed 18-year-old African-American Michael Brown on August 9. The controversial jury decision spawned protests in 180 cities of 38 US states, as well as in the United Kingdom.