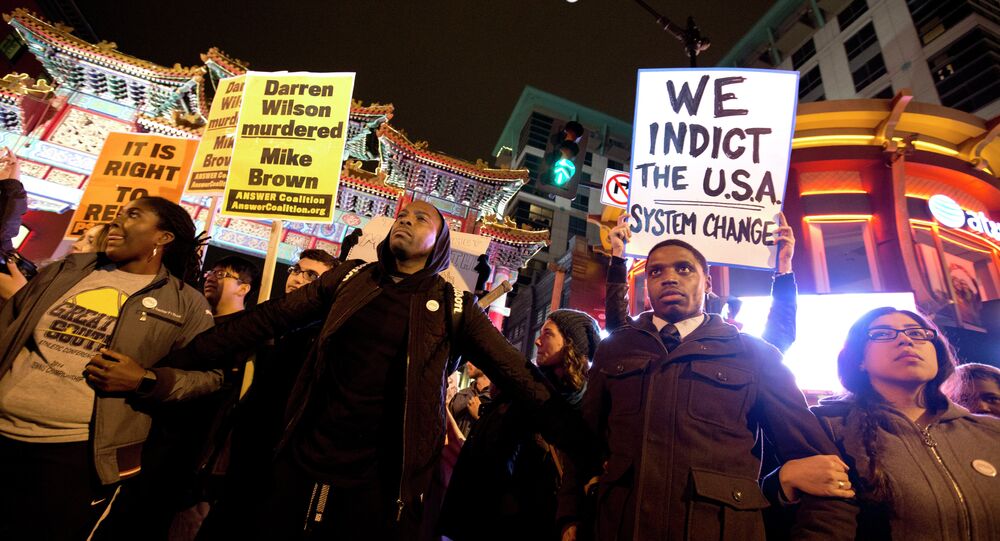 Dozens of protesters gathered at major retailers in the St. Louis, Missouri area Friday in support of the 'No Justice, No Profit' campaign protesting the St. Louis grand jury's decision not to indict the officer charged with killing Michael Brown, AP reported.

The protests are said to have been planned by about 100 people who met in a St. Louis church in Ferguson on Thursday evening, where they ate Thanksgiving dinner, sang, prayed, and discussed a strategy to support the ‘No Justice, No Profit’ Black Friday boycott campaign which was organized by the Justice for Michael Brown Leadership Coalition.

© Fotobank.ru/Getty Images / Chip Somodevilla
Online Activists Protest Black Friday Sales Spree Over Ferguson Ruling
Early Friday about 75 protesters are said to have been moving between big box stores including Walmart and Target, carrying signs and chanting “Hands up, don’t shoot!” and “Shut it down!” and singing “Back away from the Wal-Mart, back away!” The protesters are said to have dispersed peacefully when told to do so by local police, moving on to the next store, Reuters explained.

It remains to be seen how the protests affect Walmart, its sales or its image, the company already embattled following the decision by workers in over 1,600 stores to go on strike earlier this week over poor work conditions and low wages.

© REUTERS / Luke MacGregor
Black Friday Shopping Spree Brings Arrests, Disorder in UK: Reports
Cathy Daniels, who prepared Thanksgiving dinner at the church where the protests were planned, commented on Monday’s decision not to indict officer Darren Wilson, was quoted by Reuters as saying “we are bruised but not broken,” and that “we are regrouping. We are not going to take this lying down.”

The St. Louis protests follow demonstrations which led to seven arrests in New York during Macy’s Thanksgiving Day Parade on Thursday, as well as protests around the US and elsewhere around the world all this week.

© AP Photo / Jeff Roberson
Riot-Struck Ferguson Business Raises $230,000 in Fund-Raising Drive
The ‘No Justice, No Profit’ campaign seeks to bring attention not only to the Michael Brown ruling, but to the wider problems afflicting the US criminal justice system and its purported discrimination against African Americans and other minorities.

It is as yet unknown how seriously the viral social media-led campaign will affect sales on Black Friday, which is widely regarded as the first day of the Christmas holiday shopping season in the United States. The US National Retail Federation had earlier projected 140 million shoppers coming out and over $60 billion in sales for this year, but the campaigners for social justice hope to challenge that.