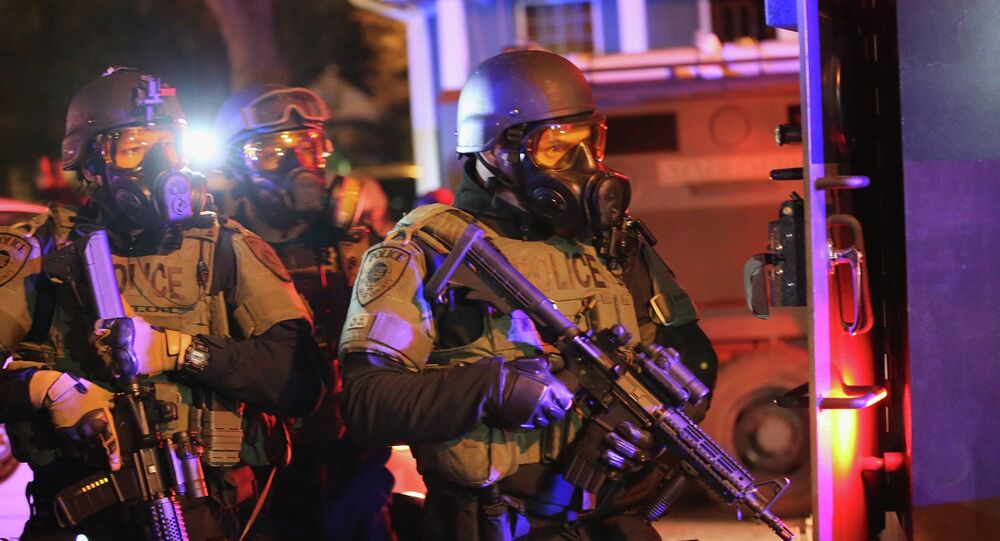 A man dressed in military fatigues made a "trigger signal" at an African-American student protester in the riot-ravaged suburb of Ferguson, the protester said.

FERGUSON, November 27 (Sputnik) — An African-American student protester told Sputnik a man dressed in military fatigues made a "trigger signal" at him on Thursday in the riot-ravaged suburb of Ferguson, where police have been accused of bullying behaviour against ethnic minorities.

"There was a guy in a Jeep. I'm not sure if he was a National Guardsmen or not. He was in army fatigues. He triggered me with his index finger, pulling it back and forth in a gun shooting position. It was a message of hate," Troy Donaldson, 25, a St. Louis resident, businessman and law student at Harris-Stowe State University told Sputnik outside Ferguson Police Station.

"I'm not sure what he was doing here, but I know it was a hateful message. Hate cannot combat hate. That's not productive. We're not going to get any progress with that. When we love those who hates us, it changes their mind. Because they are hating for no reason at all," Donaldson said.

On Monday, a grand jury decided not to bring charges against white police officer Wilson for shooting and killing Michael Brown, an unarmed African-American teen, during an altercation in a backstreet in the mostly-black suburb of Ferguson on August 9.