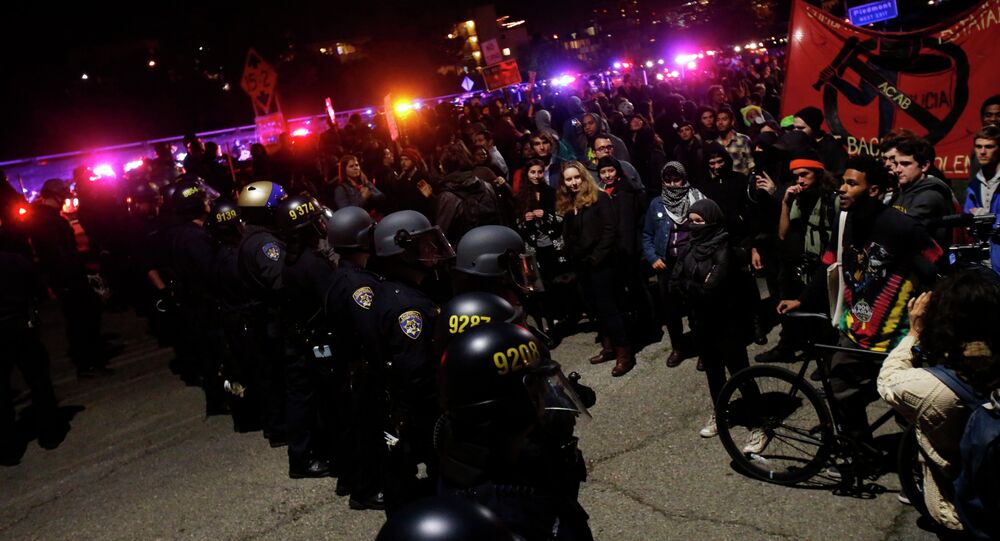 Head of the Rhode Island Police Chiefs' Association said a report that shows Rhode Island police arresting African-Americans at a much higher rate than members of other ethnicities lacks sufficient explanatory data.

"I think there are a number of potential factors that could impact the disparity and there is not enough information offered to diagnose what those specific factors are," Chief of Police Elwood M. Johnson, Jr. said.

© REUTERS / Elijah Nouvelage
Racist Police Killings of African-Americans Have Its Roots: Journalist
Chief Johnson was responding to a report that showed racial disparity in arrest rates in 13 Rhode Island municipalities, based on data reported to the FBI in 2012, which all exceeded disparity rates found in Ferguson, Missouri.

As an example of where the statistics could be misleading, Johnson pointed to South Kingstown, where African-Americans were arrested at rates 9 times higher than those of a different race. South Kingstown is heavily traveled by non-residents, including tourists and university students, which could impact percentages. Johnson also emphasized that Rhode Island police have for years worked to proactively address racial inequalities.

"Our Rhode Island police departments have worked collaboratively with community partners for several years on concerns that include race relations and improved training curriculums that includes cultural diversity, and impartial policing," the chief explained.

© REUTERS / Handout via Reuters
Officer Wilson Says He Did His Job Right in Ferguson Shooting: Reports
When asked to comment on the situation in Ferguson, Johnson said it would be irresponsible for him to speculate on the prosecutor's handling of the case without more details. The police chief did say while thorough investigations and forensic examinations can be lengthy, the process is necessary to ensure the information upon which a grand jury deliberates is reliable.

The American Civil Liberties Union (ACLU) of Rhode Island said the reported disparity in the state's arrest rates could foster racial tensions, similar to those in Ferguson. In August, Michael Brown, an 18-year-old African-American, was shot dead by white police officer Darren Wilson in Ferguson, Missouri. A grand jury decision on Monday not to indict Wilson sparked protests that riot police responded to with tear gas, batons and flash grenades.

US Justice Plagued by Allegations of Institutionalized Racism: Expert