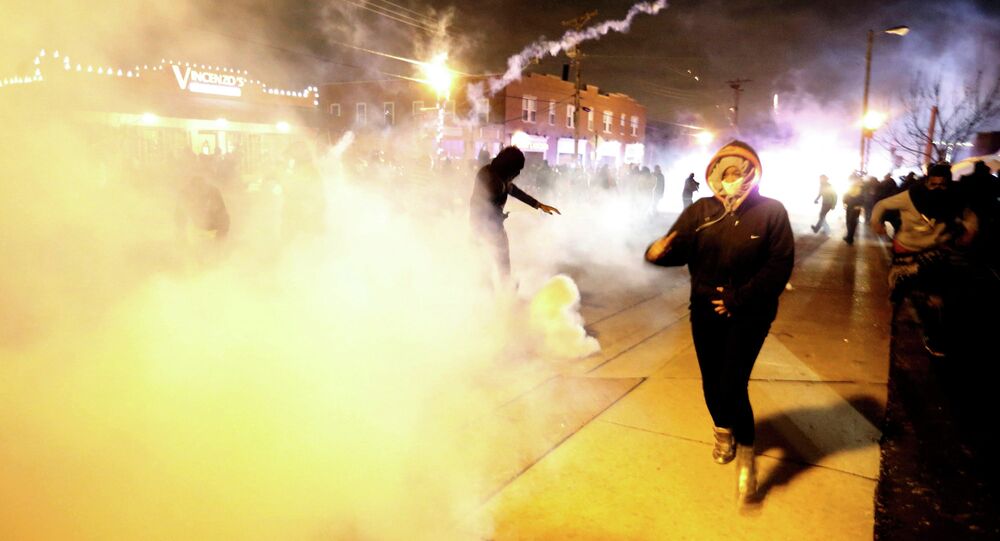 Russian Foreign Ministry said the crackdown on Ferguson protests revealed flaws in US democracy, as well as deep-rooted racism within the society.

“The authorities’ actions make it clear that they chose to crack down hard on protests against police brutality and against a crime that went unpunished despite being evidently racist in its nature,” the ministry said in a statement.

“The scope of public outrage and the disproportionate reaction by law-enforcement bodies again confirm that this is not a separate incident, but a deep systematic flaw in the US democracy that has failed to overcome a deep racial rift, discrimination and inequality,” the statement reads.

Major protests erupted in 38 US states over a grand jury's decision Monday not to indict Darren Wilson, a white police officer who fatally shot Michael Brown, an unarmed African-American teenager, in the St. Louis suburb of Ferguson on August 9.

© REUTERS /
St. Louis Police Chief Releases Number of Detained in Ferguson After Riots
In St. Louis County some 45 people were arrested and at least 13 have been injured in riots. Major networks broadcasting live from the town showed local police firing tear gas on protesters.

This is the second wave of protests linked to the incident with the first hitting the country in the aftermath of the shooting. Police then were criticized for using heavy-handed tactics to quell the protests.

Addressing this issue on Tuesday, UN Secretary-General Ban Ki-Moon called on the authorities of the US State of Missouri and US federal authorities to provide an opportunity for the protesters to express their opinions freely, provided they do so in a peaceful manner.

In recent days a number of Russian officials, including Russian Foreign Ministry human rights ombudsman Konstantin Dolgov and the chairman of the Council of the Federation Committee (Russia's upper house) on Constitutional Legislation Andrey Klishas have criticized the racial profiling and disproportional use of force by the US police.

Celebrities Go to War of Words Over Ferguson Unrest