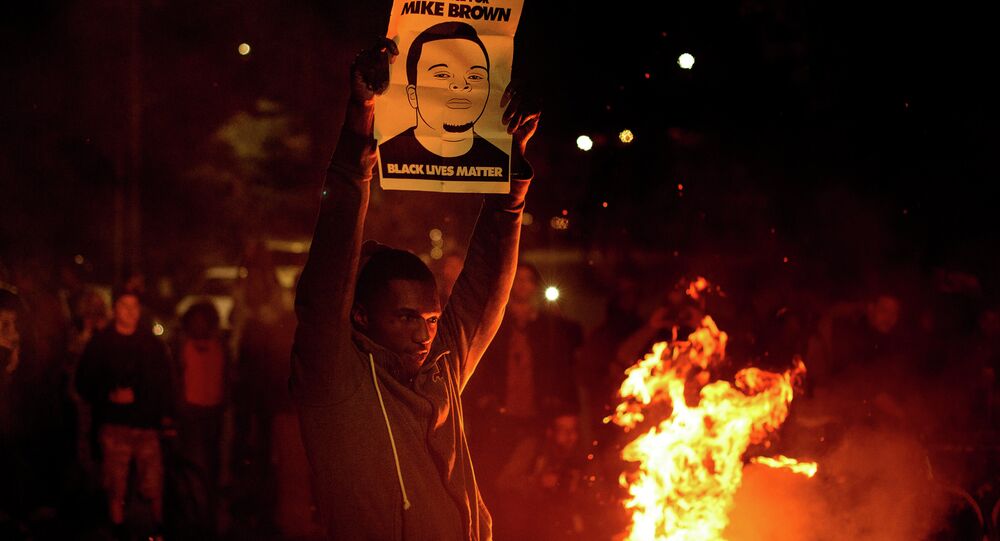 Protests in 90 US cities follow the announcement that a grand jury will not indict police officer Darren Wilson on any charges for his actions in the death of Michael Brown, an unarmed 18-year old African-American from Ferguson, MO.

4 and 1/2 minutes of silence for Michael Brown in Clayton. #Ferguson https://t.co/iVNLCZly6v

Times Square back to the regular hustle and bustle this morning after massive protests followed #Ferguson decision. pic.twitter.com/JANzkhYfwC

It's a new day, and the movement continues. Gathering for prayer and action in Clayton now. #fergusonfaith #ferguson pic.twitter.com/N7t2CZEk43

61 people were arrested during the protests in Ferguson, according to St. Louis County police's records, released early Tuesday.

St. Louis Mayor Francis Slay said 21 people were arrested in the city. 'The people that were committing violence, looting, smashing windows, that is not protest,' he said, the Guardian reports.

The cleanup at Smart and Final in #Oakland. Some #Ferguson protestors looted the store overnight. pic.twitter.com/IkPrFjsr45

Protesters run from a cloud of tear gas in #Ferguson pic.twitter.com/6ffXx9ps5R

In #Ferguson, streets were quiet but fires continued to burn following a night of violence. http://t.co/u6jnZVMyGk pic.twitter.com/7EbPcx864s

This from #Ferguson gives me chills: https://t.co/o1kmm916Xc

Photo: Police in riot gear move past a burning vehicle amid protests in #Ferguson. (By Larry Smith/EPA) pic.twitter.com/mpMyeUieop

Holiday shopping season off to a hot start in #Ferguson pic.twitter.com/VaUq0NsOnT

Fire department not even trying to put out some blazes, buildings too far gone. #Ferguson https://t.co/50i4LroKWq

Meanwhile police car burning on the streets of Ferguson as violence continue.

From #Ferguson to Chicago to Washington, D.C. to New York: pic.twitter.com/1H5ABWTb1V

RT @WillyFerrell: I don't have words. How can you plead for peaceful protest when you show up like this? #Ferguson pic.twitter.com/z8VddnolOL

Police officer tore Mike Brown leaflet out of protestor's hands and tore it into 3 pieces.

We were backing away slowly and he tore it deliberately from my hand into 3 pieces. #oakland #ferguson pic.twitter.com/IvhRHxSgRY

At least 13 people have been injured in St. Louis County as a result of the riots in Ferguson, Samantha Liss, St. Louis Post-Dispatch correspondent reported.

As of 1:25 a.m.: Area hospitals report a total of 13 injuries, including two with gunshot wounds.

University Police officer shot in the arm during the protests in Ferguson, NBC10 correspondent reports.

The tear gas cannister that hit me tonight in #Ferguson, nothing serious. pic.twitter.com/j69Xb0mvNn

Amnesty International has reported that its observers have been aimed at and gassed by riot police in the US city of Ferguson.

The American flag is burning on the 580 freeway as police approach protesters. #Ferguson pic.twitter.com/8qKeviRLLp

"A riot is the language of the unheard." Martin L King Jr. #Ferguson pic.twitter.com/ojXrBoXBTM

Missouri Governor Jay Nixon on Tuesday called in more national guardsmen to Ferguson amid widespread unrest in the city.

There are only a few protesters left, but lots of police who have them pretty well surrounded in Oakland #Ferguson pic.twitter.com/uwFYeAybab

Police fired rubber bullets at protesters, according to reports.

This is what they are shooting us with, among other things… it's hard as a rock… #Oakland #Ferguson #FTP pic.twitter.com/XGRNR4g6qV

First you say there's no diversity in the police force but you insult black officers and wonder why? Lol #ferguson https://t.co/edLSyywchQ

More than 29 people have been arrested in Ferguson tonight, according to reports.

Are cops the good guys? You decide. Video shows an unconcious woman brought to @stlcountypd then gassed. #Ferguson https://t.co/hJqNeCSKtg

© REUTERS / Larry Downing
Obama: US Still Faces Challenges in Race Relations
Demonstrators swarmed the streets of 90 US cities following the grand jury’s decision not to indict police officer Darren Wilson early Tuesday over the fatal shooting of an unarmed black teen Michael Brown, with more than 120 vigils planned, according to Daily Mail.

"We all bleed red" #seattle #ferguson protesters still at 5th ave and madison at. Talking about marching all night pic.twitter.com/Ia1D4AZiIu

Picture with the last tweet in Oakland #ferguson pic.twitter.com/3zG5I37JWx

Mario Anzuoni
Flights Restricted Over Ferguson: US Federal Aviation Administration
US police must not employ immoderate force and must respect the peaceful protests taking place in Ferguson, Missouri subsequent a grand jury’s decision to not charge the police officer who shot Michael Brown, Amnesty International said in a Tuesday press release.

Cities around the nation react to #Ferguson pic.twitter.com/flEz4NL9BR

I was teargassed 2nite he 4 helping a group of people carrying a woman who had a heartattack. #Ferguson pic.twitter.com/y5xS9I1ndQ

An unconscious woman being carried by her family was taken to the police for help, all got fired upon and gassed.

While CNN runs wall to wall footage of #Ferguson burning, this is happening on the steps of the US Supreme Court: http://t.co/yklqKqI86B

Brown’s shooting triggered massive protests against police brutality in Ferguson and around the country, and was followed by violent clashes between protesters and police officers in Ferguson in August, leading Missouri Governor Jay Nixon to declare a state of emergency, while the FAA implemented a no-fly zone.