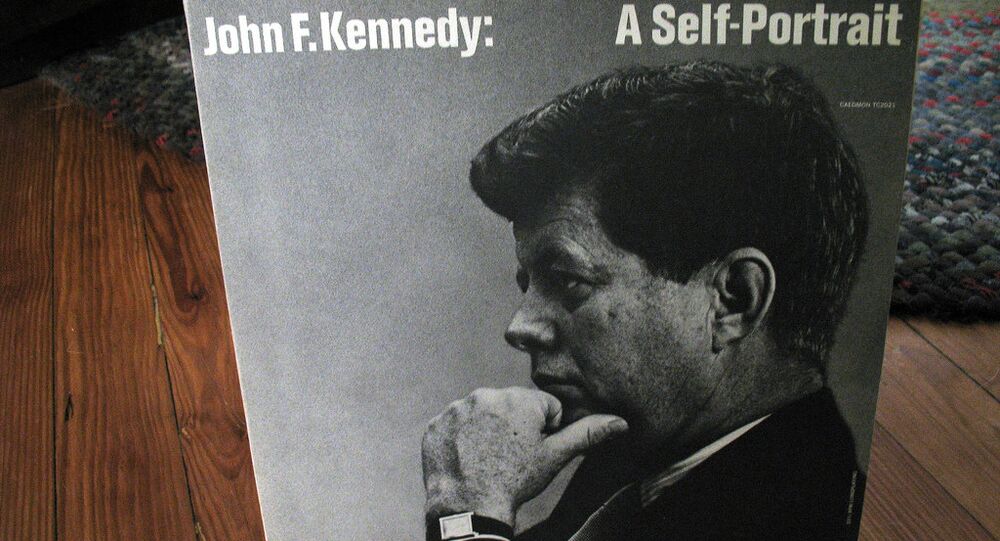 November 22, 2014 marks the 51st anniversary of assassination of John Fitzgerald Kennedy, the 35th President of the United States.

MOSCOW, November 22 (Sputnik) — John F. Kennedy was born in Brookline, Massachusetts, on May 29, 1917. He was raised in an Irish Catholic family. His father was a prominent businessman, diplomat and politician. His mother was a housewife. Joseph Patrick Kennedy and Rose Elizabeth Kennedy had nine children, four boys and five girls.

John F. Kennedy fought in the Second World War. He served in the Pacific Navy and was honorably discharged with the rank of Lieutenant. The torpedo boat under Kennedy's command was rammed by a Japanese destroyer on August 2, 1943. John F. Kennedy was actively involved in rescuing crew members, for which he was awarded a Purple Heart and a Navy and Marine Corps Medal. After the war, Kennedy worked briefly as a journalist and then decided to go into politics as his father wanted him to. His political career began in 1946, when he was elected a member of the US House of Representatives from the Democratic Party. Subsequently, he was elected for three terms, from 1947 to 1953.

In 1952, Kennedy ran for the Senate and defeated his Republican rival by a margin of 70,000 votes. He was re-elected in 1958 with more than 70 percent of the vote. He was a member of the Senate Committee on Labor and Public Welfare, and, starting in 1957, the influential Committee on Foreign Relations.

On July 13, 1960, the Democratic Party officially nominated Kennedy as its candidate for the US presidency. On November 8, 1960, John Kennedy won the race against Republican candidate Richard Nixon, becoming the youngest president in US history and the nation's first Catholic president.

Kennedy took the presidential oath on January 20, 1961. The new president's action plan was named the New Frontier. During his presidency, Congress approved the creation of the Peace Corps, raised the minimum wage, liberalized social security, adopted laws on housing construction, aid to economically distressed areas, retraining the workforce and paying benefits to temporarily unemployed workers. The Apollo program – a huge step forward in space exploration – was launched during the Kennedy administration. Instead of outdated doctrines, such as "rolling back communism" and "massive retaliation," the Kennedy administration proclaimed a doctrine of flexible response.

At the same time, Kennedy approved the US intervention in the civil war in South Vietnam. The Berlin and the Cuban missile crises happened on his watch as well.

In late 1963, in preparation for the upcoming election year, President Kennedy began a tour of the country. On November 21, 1963, Kennedy flew to Texas. The next day, his motorcade drove triumphantly through the streets of Dallas, then turned to Elm Street where, in front of a large crowd of well-wishers, shots were fired at 12:30 p.m. (18:30 GMT).

According to official data, three shots were fired. The first bullet hit Kennedy in the back, passed through and exited through the neck. It also wounded Governor John Connally of Texas. Another bullet struck the president in the head, mortally wounding him. Five minutes later, Kennedy was at Parkland Hospital, but doctors could do nothing to save his life. At about 1 p.m. (19:00 GMT) on November 22 it was announced that President Kennedy was dead. Connally underwent two surgeries and survived. Two hours later, the police arrested 24 year-old Lee Harvey Oswald, a former Marine, on charges of murdering President Kennedy.

Two days later, Oswald was shot and killed by Jack Ruby at a police station in Dallas at the moment when Oswald was taken outside in order to be sent to a federal prison. Jack Ruby owned a nightclub in Dallas and, according to unconfirmed reports, was associated with the mafia. On March 14, 1964, Ruby was sentenced to death, but appealed the ruling and won. In December 1966, when Ruby was awaiting the appointment of a new court date, he was diagnosed with cancer. He died on January 3, 1967. During the investigation and trial, Ruby, like Oswald, was pronounced a lone killer.

After the autopsy, John F. Kennedy's body was taken to the East Room of the White House for a 24-hour vigil by family, relatives and high-ranking politicians. The funeral of John F. Kennedy took place on November 25, 1963, in Washington, DC, with over 200,000 people coming to the Capitol to bid farewell to the deceased president.

At the Capitol, the casket was placed on a gun carriage and brought to St. Matthew's Cathedral and then to Arlington Memorial Cemetery, where he was buried. John F. Kennedy's murder was investigated by the Federal Bureau of Investigation (FBI), then headed by J. Edgar Hoover, and the Warren Commission. In 1979, as they were rechecking the materials of the FBI investigation, the members of a special Congressional committee came to the conclusion that the investigators had done a great job concerning the assassination of the president, but failed to pay enough attention to clarifying the motives and the alleged plot against Kennedy. The results of the Warren Commission's investigation were published in late September 1964.

According to the Commission, Oswald, from the sixth floor of the school book depository, fired three shots from a Carcano carbine, missing the target once. The time elapsed between the shot that wounded the president in the upper back and the fatal shot was somewhere between 4.8 and 5.6 seconds.

The official Warren Commission report sharply criticized the Central Intelligence Agency (CIA), the FBI and the Dallas police for failure to prevent the US president's death. Based on the report, which was replete with inaccuracies, contradictions and errors, the commission nevertheless unambiguously concluded that there was no conspiracy against the US president.

However, neither the US public nor the international community was satisfied with the Warren Commission's official findings. New versions of the tragedy kept coming up. Many people agree with the theory that Kennedy was killed in response to his declared war on organized crime, others are convinced that the reason had to do with Kennedy's position on Vietnam (three days after the assassination, Lyndon Johnson repealed Kennedy's directive to withdraw US troops from Vietnam. In 1964, when he became the president-elect, Lyndon Johnson significantly increased the US military presence there). Some believe that Kennedy was killed for his efforts to weaken the omnipotent CIA, which he threatened to "splinter into a thousand pieces and scatter to the winds."

According to another version, the conspiracy was led by Vice President Lyndon Johnson, who was eager to become president, and FBI Director J. Edgar Hoover, his close friend. According to advocates of this version of events, Hoover acted in the interests of the mafia, which had started experiencing hard times after Robert Kennedy, the president's brother, took the office of Attorney General.

There are also theories that Kennedy was killed by Soviet and/or Cuban intelligence services.

They also attribute the cause of the president's death to his allegedly sharp interest in UFOs and aliens shortly before his demise.

John Kennedy was a winner of the Pulitzer Prize (US award for achievements in newspaper and online journalism, literature, and musical composition). He was presented this award in 1957 for his biographical book, Profiles in Courage, about prominent Americans who had gone down in history thanks to the firmness of their character.

John F. Kennedy was married to Jacqueline Bouvier, whom he met in 1952. They had four children together, two of whom died shortly after birth. The eldest daughter, Caroline Kennedy, studied to be a lawyer, worked at New York's Metropolitan Museum and was involved in charity work. In 2009, she claimed a seat in the US Senate from New York State, but later withdrew her candidacy.

In October 2013, Caroline Kennedy became the first female US ambassador to Japan. John Fitzgerald Kennedy Jr. worked as a journalist and a lawyer. He died in a plane crash in 1999 at the age of 38.