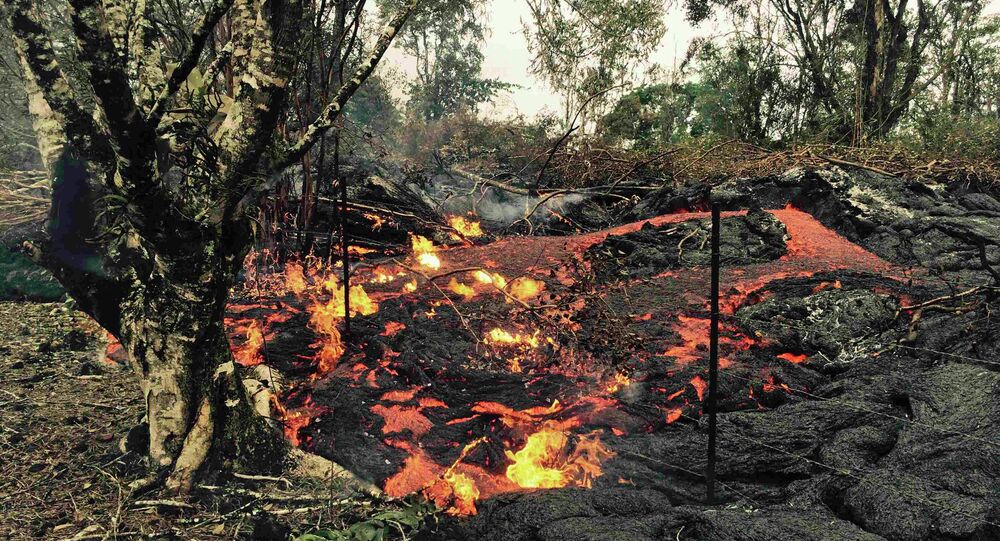 The lava flow has been creeping toward Pahoa for months, triggering concerns among the town-dwellers.

MOSCOW, November 10 (Sputnik) — A lava flow has moved closer to a transfer station on Hawaii's Big Island, while the front edge of the liquid rock still remains at 480 feet distance from Pahoa Village Road.

"A US Geological Survey said Sunday that the leading edge of the lava from Kilauea volcano hasn't advanced since Oct. 30. It's about 480 feet from Pahoa Village Road, which goes through downtown," the Associated Press reported.

The lava flow has been creeping toward Pahoa for months, triggering concerns among the town-dwellers. Some of them have already been evacuated, others have been preparing to counter the natural disaster.

A small breakout from the #Volcano #lava flow near the Pāhoa cemetery overwhelms a fence and pushes toward a tree. pic.twitter.com/hIUz7QYLfY

Last month schools in the Pahoa area were closed and about 1,700 students and 300 school employees were transferred to other educational institutions.

"On Monday, about 400 students whose school is in the projected path of the lava flow, will start classes in portables set up in the parking lot of Keeau High School," Honolulu Star Advertiser, Hawaii's media outlet writes.

Lava Inflation - Pahoa Lava Flow - From 3' to 12' thick .. look at the cinder surrounding the power pole to compare. pic.twitter.com/kfsQVDGRqa

On the weekend, volcano scientists released photos showing the flow of lava on Apaa Road, claiming the the flow has been thickening since the front has stopped. Comparing the photos of lava crossing Apaa Road on October 25 to the flow on lying on the road on November 4, scientists pointed to the fact that lava had become 9 feet thicker. "A power pole, surrounded by lava in the photos, gives some perspective on the inflation and how high the lava has risen," the media outlet notes.

Experts claim that in early 1990, coastal Kalapana was impacted by the similar lava flow which had slowly approached the town, Honolulu Star Advertiser stresses. Unpredictably, a "relatively narrow flow" destroyed a church, store and more than 100 homes were swallowed by the molten rock over a six-month period.